“Not only was it original, it was very moving and made the viewer think.” 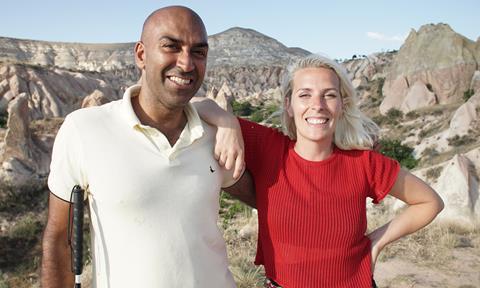 “Travelling Blind was a cracker. Not only was it original, it was very moving and made the viewer think. Which is how it should be.”
Carol Midgley, The Times

“All the pitfalls were sidestepped. They learned from each other, but it didn’t feel like life lessons were constructed for the camera. It didn’t feel like a disability was being exploited or patronized. Or that someone’s suffering was being pressed into the service of self-improvement for another. Or any of the other infuriating ills that such setups are generally heir to.”
Lucy Mangan, The Guardian

“This was lovely, life-affirming fare. I wouldn’t be surprised if this gently joyous travel format returned for a full series soon.”
Michael Hogan, The Telegraph

“This is a devastating and funny – if never quite devastatingly funny – exploration of bereavement. It is often pitiless and hard to watch – but those are the moments Gervais’s earnestness shines most brightly. Under the laconic chuckles After Life is at once a scorched-earth portrait of grief and an impassioned exhortation to keep living.”
Ed Power, The Telegraph

“Alan Sugar doesn’t get any more lovely with the years. Thankfully, he made only a token appearance on Celebrity Apprentice before sending two teams of highly able candidates to organise last-minute charity cabaret dinners. For the first time in an age, I thoroughly enjoyed The Apprentice.”
Christopher Stevens, Daily Mail