“A clear and often brilliant dramatisation.” 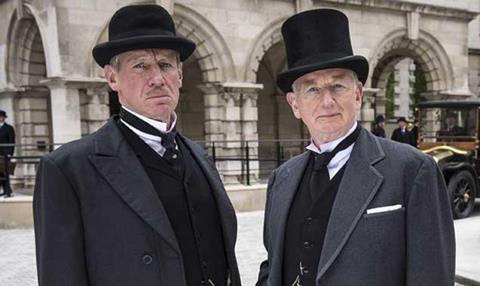 “37 Days is fabulous – a forensic political thriller, but still very human, as much about the people involved as the momentous events themselves. It’s convincingly written and has loads of great performances, but Ian McDiarmid’s Grey stands out. The dates flicking past give the whole thing a sense of urgency and doom.”
Sam Wollaston, The Guardian

“After 20 minutes of this three-parter, I was hooked by the game of diplomacy on the eve of a war that we viewers knew was coming. And I was reminded all the time – like many viewers, surely – of Russia’s current perilous game with the Ukraine.”
Christopher Howse, The Telegraph

“This account of the run-up to World War I was so clogged up with factual detail that it became stationary. It was like watching a made-for-schools dramatisation, far too didactic to be entertaining.”
Christopher Stevens, Daily Mail

“I don’t doubt that in the story of how Europe’s superpowers jockeyed, threatened and soothed one another before the slaughter began there is material of interest. Regrettably, the BBC has overlooked it all and replaced it with a long assembly of scenes in which people with absurd facial hair talk about people, places and events we mostly don’t see. This is not a thriller. Or if it is, then so are Cash in the Attic, Question Time and cutting toenails.”
Matt Baylis, Daily Express

“37 Days is a clear and often brilliant dramatisation by Mark Hayhurst of the failure of diplomacy over that long month between the assassination of Archduke Franz Ferdinand by Serbian nationalists and Britain’s declaration of war on August 4. We hunger for every detail… and we get it.”
Andrew Billen, The Times

“Rita, Gail, Roy and friends are real people to us. We don’t want to be told how the illusion is created and sustained. That’s like finding out how a magic trick is done. But it was heart-warming to see how deeply Barbara Knox, who has played newsagent Rita since the Seventies, loves the show.”
Christopher Stevens, Daily Mail

“When you take into account all those bricks and cobbles, The Rovers, the corner shop, Audrey’s salon, Street Cars, all the rest of Weatherfield, plus the actors and their dressing rooms and green rooms, and special plants and special egos, the weight of 53 years of history, and the responsibility to millions of viewers – then it begins to make that Channel 5 show Monster Moves look slight.”
Sam Wollaston, The Guardian

“Like the rest of the new series, the final episode served up no surprises. Instead, we got the predictable, comforting combo of ageist jokes, fatist jokes, Essex jokes, a bit of suggestiveness, and some shoe-horned contemporary cultural references mostly succeeding thanks to the strong chemistry between the show’s three female stars.”
Sally Newall, The Independent