“Suchet has managed to well and truly eclipse any previous Poirots.” Read on for the verdict on last night’s TV. 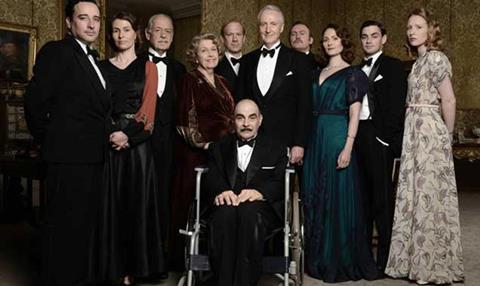 “Curtain is an episode that can easily be watched again with pleasure while knowing its resolution. And so it shall be. Poirot has not only survived ITV peaktime schedules over 25 years but its repeats have whiled away millions of afternoons. For shiftworkers, invalids and students, and for all our retirements, last night was not farewell but au revoir.”
Andrew Billen, The Times

“Kevin Elyot seemingly didn’t deviate from a plot that found Poirot popping his clogs around the one-hour mark, leaving a 20-minute posthumous explanation in the form of a letter to Hastings. It was a strangely anti-climactic. But say what you like about the creaky plots and stock characters, Suchet has managed to well and truly eclipse any previous Poirots.”
Ellen E Jones, The Independent

“It seems unthinkable that his performance as the arrogant, obsessive, charming little man with the egg-shaped head could ever be bettered.”
Christopher Stevens, Daily Mail

“Typically, Poirot and Hastings were holed up in one of those claustrophobic country house settings where virtually everyone is being rancorous to everyone else… That’s what happens in your average Poirot but there’s usually some charm to counterbalance it… We felt the lack of it keenly last night.”
Matt Baylis, Daily Express

“Everyone is poisoning and shooting each other, or popping sleeping pills into each other’s hot chocolate. And having affairs, with him, and her, and who knows who else? It’s exactly as Agatha Christie – and Poirot – should be. I’m totally in the dark, in every way, but having fun.”
Sam Wollaston, The Guardian

“Only now that he’s gone, perhaps, are we beginning to realise how much there is to be said for a show that’s content to concentrate simply on being reliably good.”
James Walton, The Telegraph

Bouffants, Beehives and Bobs: the Hairstyles That Shaped Britain, BBC4

“In a hugely entertaining, one-off documentary we met Teasy-Weasy Raymond, the London-born stylist who affected a French accent and dyed his dogs and the carnation in his buttonhole to match his suits.”
Christopher Stevens, Daily Mail

“This was a lively overview of tonsuring… Bouffants, Beehives and Bobs is the sort of programme that would never have been commissioned before the advent of BBC4… This kind of archive-rich social history is particularly well served by the channel.”
Ellen E Jones, The Independent

“It was quite amusing and also presumably quite cheap to make, so there might be future series, although Crackanory will struggle to have one tenth of the lifespan of its role model.”
Ellen E Jones, The Independent

“As ever Ruth Goodman was brilliant at picking out the fine domestic detail and the menfolk demonstrated just how much grunt and resourcefulness was needed to make the land yield its bounty. Overall it wasn’t the recreation of hardship and toil that impressed as much as the remarkable sense of social evolution.”
Gerard O’Donovan, The Telegraph