TV Critics: Angry, White and Proud; Life of a Mountain: A Year on Scafell Pike; Mel And Sue

“This is football hooliganism dressed up as an ideological battle.” 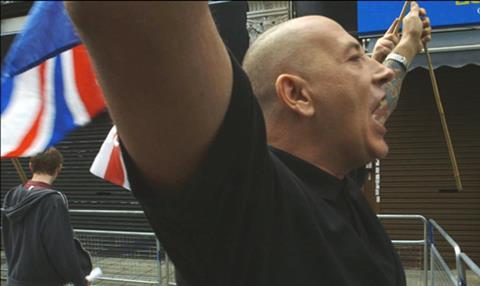 “Depressingly topical after last week’s events in Paris, Jamie Roberts’ film was an assured fly-on-the-wall take inside a collection of British far-right extremists. Or, as they’d no doubt prefer it: anti-Islamists who are providing the last line of defence between a spineless British government and Abu Bakr al-Baghdadi pruning the poinsettias in the back garden of 10 Downing Street. This is football hooliganism dressed up as an ideological battle.”
Will Dean, The Independent

“Is Colin just a horrible moron or an actual worry? Film-maker Jamie Roberts spent a year with him – and Paul, and Jason and other members of the far right – to make Angry, White and Proud. It is a very different scene to the earlier one when Brighton was basically telling them to bog off. And along with Paul’s dream of reuniting the far right, and talk of attacks, militia, sectarian war, it is worse than ugly, it is properly worrying.”
Sam Wollaston, The Guardian

“There was no articulate leadership, no clear political agenda; there were no obvious aims other than the violent expression of racism. Making this style of documentary is the TV equivalent of lifting a rock to see what crawls out from underneath – disagreeable but enlightening. And all praise to Jamie Roberts for having the courage to do it.”
Gerard O’Donovan, The Telegraph

“At times Roberts seemed intent on causing more alarm over their threat than the racists themselves, but gradually a portrait emerged of a group not only angry, white and proud but frightened and depressed. At the centre was Colin who early on boldly stated he “hated” Muslims even more than West Ham. He seemed such a lost cause when, right at the end, he announced he was getting out. “All this anger and crap I have been getting involved in is not motivated by hatred of other people but because I don’t like myself,” he self-diagnosed. I felt like inviting him for a bonding Sunday up Scafell.”
Andrew Billen, The Times

Life of a Mountain: A Year on Scafell Pike
BBC4

“So foul and fair a night’s TV I have not seen. The fair was Terry Abraham’s film Life of a Mountain: A Year on Scafell Pike, which, from its first moments of mists rolling through the mountain tops to the time-lapse shots near the end of shooting stars and two beams of torchlight ascending and descending England’s highest peak, was as refreshing as walking the peak yourself. The documentary was a Wordsworthian hymn to nature but, more than that, a eulogy to humanity.”
Andrew Billen, The Times

“Is there a prettier view in the world than the one along Wastwater, with the fells reflected in the dark lake? Terry Abraham’s lovely film isn’t just about the views, the different faces of England’s highest hill; it is about the faces – and the lives – of those who live in its shadows.”
Sam Wollaston, The Guardian

“From the first moment on Mel And Sue, their schoolgirl humour has been to the fore, as they launched into a stream of the double entendres that they relish so much on The Great British Bake Off. It’s 17 years since the duo’s last daytime format, Late Lunch. Make no mistake, they are thrilled to be back. But when they both talk at once, completing each other’s sentences, it’s hard to hear the jokes. Keep the excitement under control, girls. Calm down. Big breaths, as Jim Dale used to say.”
Christopher Stevens, Daily Mail

“The key question was this. Would all the eyebrow-raising, all the innuendo — which is so successful in their role as naughty children to Mary and Paul in The Great British Bake Off — be too much when not tempered by sensible Mum and Dad? The answer was no, mainly. After a sticky start it felt pleasingly naughty to have gags about the gay dating app Grindr, or plays on the word “duck”, in what is traditionally the Countdown slot.”
Alex Hardy, The Times