“Here was proof that the Swedes can turn out rubbish on a par with our own.” Read on for the verdict on last night’s TV. 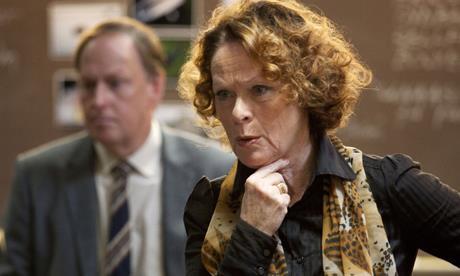 “A lot of people are being killed most horribly by an American serial killer. But this being Sweden, top cop Jenny Hultin and her team approach their seemingly impossible task with stoical Scandi good humour. And have lots of sex. They love their sex, in Sweden. It’s not The Killing – more of a conventional thriller about the crimes than the people involved with the crimes. But it’s thrilling and chilling. Of course it’s good, it’s from over there.”
Sam Wollaston, The Guardian

“If you really can’t live without subtitles on a Saturday night, it may ease the craving until something better comes along. But you’ll probably end up hoping that something better will.”
Tom Sutcliffe, The Independent

“It was still pretty cool and it was still better than middle England lady gardeners stumbling across rapscallions in the rhododendrons. But it offered nothing new. In fact it seemed, with its list of murdered businessmen who had, horror!, been in a Masonic-style order and, worse!, all played golf together, to be doing Scandicrime by numbers.”
Adrian Michaels, The Telegraph

“I have to say, in spite of my liking for Nordic crime telly, this whole ‘secret mission’ thing gave off a string whiff of The A-Team. It felt like something that belonged in Eighties action shows, not the gritty, detailed approach we expect of a Scandinavian police drama… I ended my first acquaintance with the work of Arne Dahl feeling slightly relieved. Here was proof that the Swedes can turn out rubbish on a par with our own.”
Matt Baylis, Daily Express

“The Village is beautifully observed and crafted. It’s ambitious, intimate, naturalistic, historical, evocative, real. There are some fine performances – Maxine Peake stands out, as ever, and young Bill Jones as young Bert. But it is so, so, relentlessly miserable… Watching The Village is like lying on the hard, cold cobbles of its main street, and being walked all over by that mob, in their heavy, muddy, hob-nailed boots. Real maybe, but I’m not sure I have the strength for any more.”
Sam Wollaston, The Guardian

“If the first episode was gloomy, the second reached standards of rural mud-spattered, cloth-capped, clog-shod misery for which there is no decent word… There were moments when I began to wonder how much more woe could be ladled on without the whole show collapsing.”
Matt Baylis, Daily Express

“The winner scooped nearly £30,000 in a show that included puzzles such as this: a witch dressed as a doctor, an arrow pointing at a bee’s knees, and – can you see what it is yet? – a fly, on a wall. I’d hardly expect it to be Mastermind, but this felt like bringing back Bullseye, with a swimming pool-sized board and Velcro darts.”
Alex Hardy, The Times

“It seems exactly the same, and feels like watching TV in about 1989… It’s pointless to bring back Catchphrase, like it was with Blockbusters.”
Sam Wollaston, The Guardian

“Hewer pointed out that charity might take the form of investment in talent, rather than just a drip-feed of cash that generates a new kind of dependency. But the problem was that Luke Campbell’s film only glanced at these large and important issues rather than tackling them head-on. The expedition might have helped those in real need – a British public that doesn’t fully understand the complexities of aid – but in the end it couldn’t deliver.”
Tom Sutcliffe, The Independent

“A house of cards on shifting sand built by the first two of the three little pigs. It was lousy…The endless stream of diversions - illness, breakdown, fear of kidnap, heavy traffic jams – was a wholly predictable bore. And it could have been avoided if the programme makers had not wilfully believed that a deliberate lack of planning would make for better television. Hewer even admits at the end, not sheepishly enough, that the preparations had been abysmal.”
Adrian Michaels, The Telegraph

“This was a bit of a mixed bag of an episode, but still with enough elements of uniqueness to demonstrate, almost 50 years on, just why there is still nothing like Doctor Who on television.”
Gavin Fuller, The Telegraph

“What we’re seeing isn’t just the introduction of a new assistant, but also the knocking down of an old idol – breaking the Doctor into pieces, and rebuilding him, maybe, in time for that 50th [anniversary]. Showrunner Steven Moffat, and leads Matt Smith and Jenna Louise-Coleman, it seems, are playing a delicate, fun, long game here.”
Alex Hardy, The Times

“An improvement on last week’s series opener but still exhibited many of the show’s flaws: over-long, over-positive, over-worthy… And simply not as entertaining as Ant & Dec’s Saturday Night Takeaway over on the other side.”
Michael Hogan, The Telegraph