TV Critics: Attenborough and the Giant Dinosaur; James May’s Cars of the People; The Girl Who Forgave The Nazis; Stan Lee's Lucky Man

“This was an always interesting and on occasion jaw-dropping piece of TV.” 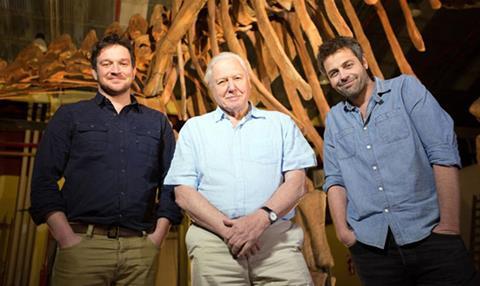 Attenborough and the Giant Dinosaur, BBC1

“This was an always interesting and on occasion jaw-dropping piece of TV, bringing to life the largest animal ever to walk the earth. Attenborough and the Giant Dinosaur used computer graphics sparingly, to make a point rather than show off, and was all the more effective for it.”
Gabriel Tate, The Telegraph

“You might think it’s hard to be interested in an animal that died 101,600,000 years ago, but Sir David made us feel we were on safari beside him, watching it forage and feed.”
Christopher Stevens, Daily Mail

“David Attenborough and the Giant Dinosaur was a truly moving piece of TV. The sheer joy on everyone’s face as bone after 101.6-million-year-old bone was unearthed was delightful. Sir David was, of course, brilliant – enthusiastic, informative, charming. I welled up watching his overjoyed face when he saw the reconstructed skeleton in its full glory.”
Amy Burns, The Independent

“As Attenborough says, dinosaurs fascinate young and old – you’ll know if you’ve ever been to Natural History Museum at the weekend during school holidays. The bigger they are, the better, and this one looked like it was going to be a whopper.”
Sam Wollaston, The Guardian

“James May’s Cars Of The People explained the phoenix-like rebirth [of Germany and Japan] very well. He did it, of course, with a lot of competitive driving and chuntering on about dashboards, like the sort of person you’d do U-turn to avoid in the pub. Nonetheless he put things far more neatly than they would do on Radio 4.”
Matt Baylis, Daily Express

“I Iike this show. I like James May. And I like cars. But this isn’t just about cars, it’s about how cars fit into everything else, and that’s more interesting. Plus there’s an interesting theory in here as well: that the way to win at cars is to lose at war.”
Sam Wollaston, The Guardian

“He took a swipe at complacent designers. He grumbled about inefficient management. He tutted over the oil crisis. When it came to the endless strikes at British Leyland, however, all James could do was bewail ‘the bloody class system’. Apparently, even 40 years on, it is forbidden on BBC2 ever to criticise the unions.”
Christopher Stevens, Daily Mail

The Girl Who Forgave The Nazis, Channel 4

“Filled with survivors’ devastating stories and harrowing pictures, this was heart-breaking viewing.”
Amy Burns, The Independent

“Hugely affecting as Steve Humphries’ documentary The Girl Who Forgave the Nazis was, I would have liked to have seen her position debated a little more, particularly in relation to Jewish doctrine and mental wellbeing.”
Andrew Billen, The Times

“No one can argue with a cast that features Eve Best as Harry’s wife and Steven Mackintosh as his sceptical boss, but writer Neil Biswas has created a very clichéd police thriller. If anything needs a lucky break, it’s the script. And us.”
Andrew Billen, The Times

“The action-packed plot got progressively sillier as the opening episode went on, which might not bode well for the remaining nine. But otherwise the down-to earth elements of Clayton’s ongoing murder investigation kept this drama just grounded enough to be interesting as well as different.”
Gerard O’Donovan, The Telegraph