TV Critics: Bake Off; Children Saved from the Nazis; Trust Me I’m A Doctor; Do Not Disturb

“Samantha Cameron stepped up to the gingham altar and proceeded to dazzle everyone with a display of spectacular home economics.” 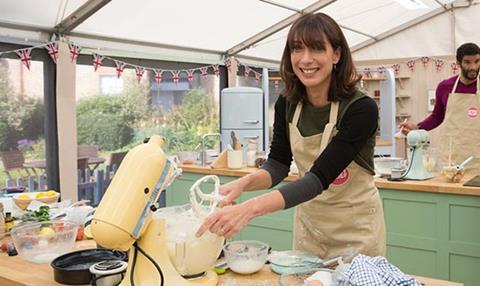 “Samantha Cameron, wife of the Prime Minister, stepped up to the gingham altar and proceeded to dazzle everyone with a display of spectacular home economics. She was so calm, so competent and such a quick learner that the Tory grandees must be wondering whether the wrong Cameron is in charge.”
Christopher Stevens, Daily Mail

“The first revelation from Sam’s triumphant appearance on The Great Sport Relief Bake Off was that she was not that posh. I had never, I realised, actually heard her speak. The second is that she is self-deprecating and funny. Even David Mitchell would feel a bat squeak of sexual attraction watching this coming-out.”
Andrew Billen, The Times

“Sam Cam was every inch the Stepford Wife and a seriously good baker. She was pretty much the only one though. Jason Manford executed some decent canapés and even won the technical round but his re-creation of the Ashes trophy was a disaster. And David James was hilarious.”
Amy Burns, The Independent

“She’s nervous, she says, can’t work the timer, has to do it by eye, it’s exhausting, she’s never had to concentrate so hard on anything … Yeah, yeah. I’m not buying it. I think she’s one of these people who says they’re hopeless, hasn’t got a clue, and then turns out to be brilliant, and does everything perfectly. My money’s on her, not just for this, but for the mum’s race at the school sports day, for everything.”
Sam Wollaston, The Guardian

Children Saved from the Nazis: a Hero’s Story, BBC1

“At its most heart wringing, this was a film honouring the sacrifice and pain of parents who sent their children into the unknown to save them, while themselves facing a terrible fate. A humbling story, all the more powerful for this unadorned retelling.”
Gerard O’Donovan, The Telegraph

“Winton said he was no value in remembering. All the hope, he seemed to feel, lay in the future. He was, I think, in that one small way, quite wrong. We need to remember Winton as much as we do Hitler. Need to know that where there was darkness, there was always light.”
Matt Baylis, Daily Express

Trust Me I’m A Doctor, BBC2

“The trouble with this show is that its findings are so inconclusive. The experts never tell us anything for certain. Is too much exercise bad for us? Maybe — but the medics couldn’t decide.”
Christopher Stevens, Daily Mail

Do Not Disturb, Gold

“Set in a Stratford hotel on the couple’s 10th wedding anniversary, it started well. But it rapidly descended into slapstick and suffered from the same problem so many comedies do – the whole premise is based on a series of misunderstandings which would just never happen in real life. The overall effect was one of pure cringe.”
Amy Burns, The Independent