“This was a frank and refreshing glimpse into a rarefied world obsessed with size.” Read on for the verdict on last night’s TV. 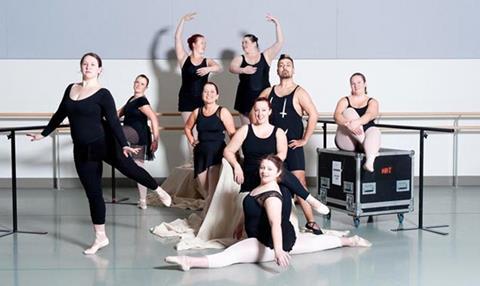 “To watch people who love to dance get the chance – and to be good at it – after they’ve spent years being too embarrassed or discouraged to do so just because of their size is, I’m here to tell you, quite uplifting. There was nothing to laugh at, except perhaps yourself for allowing tears to spill over your lower lids while watching a TV programme.”
Tim Dowling, The Guardian

“Sleep and his co-mentor, the Russian-trained prima ballerina Monica Loughman, seem to be too well inculcated in ballet’s body fascism to seek real change. Their decision to stage only a single act and stated intention to work with dancers ‘despite’ their size both smack of a defeatist lack of faith in these women. Wouldn’t a truly radical big bodies ballet use dance to celebrate physical variety, rather than apologise for it.”
Ellen E Jones, The Independent

“The first instalment was sweet, heart-warming but with a necessary dose of reality. This series incorporates all the necessary tools of reality TV: tears, tiffs and triumphs over adversity. This was a frank and refreshing glimpse into a rarefied world obsessed with size.”
Patrick Smith, The Telegraph

“It might have looked a ridiculous challenge and Wayne’s professional colleagues were certainly dubious. But Sleep was obstinate: ‘Ballet is here for everybody, not just stick insects.’  We were immediately won over by 38-year-old traffic warden Sarah, a woman so vulnerable she could make you weep with sympathy even as she handed you a £60 parking penalty.”
Christopher Stevens, Daily Mail

“Pound Shop Wars was not enhanced by Caroline Aherne’s jokey narration, and it had more than its fair share of isn’t-he-a-character type characters, but it was saved for me by a surprising discovery: the pound shop business is actually pretty interesting.”
Tim Dowling, The Guardian

“This is the first of Chris Lilley’s shows in which he’s concentrated all his efforts on realising a single character and, as you’d expect, Ja’ime is spot-on. The only problem is sometimes she’s more accurate than she is amusing.”
Ellen E Jones, The Independent

“Lilley has captured some brutally truthful elements of the worst of teenage spitefulness, but unless the following episodes inject a little more vulnerability it’s going to be difficult to stay interested with such a one-dimensional ‘mean girl’ centre stage.”
Rebecca Smith, The Telegraph

“There was a spark missing from this opening episode; it felt far too formulaic. True, detective dramas such as Inspector Morse and its Sixties-set prequel Endeavour don’t knock themselves out to be original either, but that’s because they’ve got charm and great characterisation. Gently doesn’t have that – and as a result, it’s as drab as the Newcastle sky in winter.”
Patrick Smith, The Telegraph

“Inspector George Gently is one of the better police dramas on TV, there’s little argument about that. Shaw is a commanding actor, and the prickly relationship between Gently and Detective Sergeant John Bacchus (Lee Ingleby) is more like surrogate father and son. They are the best pairing since Morse and Lewis.”
Christopher Stevens, Daily Mail