“At best, quaintly old-fashioned and, at worst, tired, dated and utterly unnecessary.” Read on for the verdict on last night’s TV. 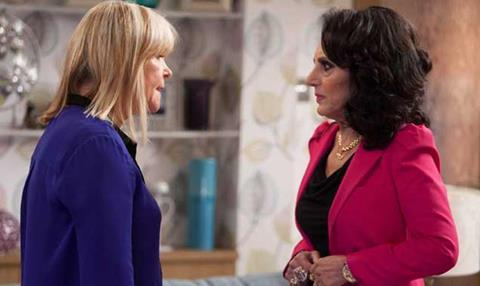 “There are many TV shows we’ve loved and lost over the years, but Birds of a Feather isn’t one of them. These days, we have interminable reality show The Only Way Is Essex to confirm all those stereotypes – and unfortunately that makes Sharon (Pauline Quirke), Tracey (Linda Robson) and Dorien (Lesley Joseph) feel, at best, quaintly old-fashioned and, at worst, tired, dated and utterly unnecessary.”
Isabel Mohan, The Telegraph

“Brash, moneyed and Thatcherite Essex was culturally relevant when Birds of a Feather first aired in 1989, but, after ten series of The Only Way Is Essex, the milieu has long since morphed into a cartoon parody.”
Gerard Gilbert, The Independent

“The trio of smashing actresses who carry the show – Linda Robson, Pauline Quirke and Lesley Joseph – must have been preserved in aspic, because none of them looks any older than they did in the Nineties… It’s the Beeb’s loss, because Birds was as funny and edgy as ever.”
Christopher Stevens, Daily Mail

“After half an hour it was as if the show had never been away – comfortable, pleasant, doing its job, like a pair of old slippers you thought you’d lost but happily had not.”
Matt Baylis, Daily Express

“Most of the episode was spent herding Tracey, Sharon and Dorien back around a sofa so that the larks and almost witty insults could begin again. The rapport between Quirke and Robson is undeniable – the actresses really were school pals – but was the relationship between Sharon and Tracey really so complex or interesting that it needed to be re-explored?”
Andrew Billen, The Times

“The only compelling mystery in Silent Witness is who on earth actually watches it? The script is consistently one of the clunkiest on television, exemplified in this episode by Nikki and Jack’s crime scene banter, an attempt so pathetically wooden it makes CSI look like Pinter.”
Ellen E Jones, The Independent

“By the end of the episode, it was unclear where this was going – but thanks to some decent acting, the plot’s twists and turns were perfectly watchable and the cliffhanger was suitably suspenseful. There’s an obvious formula, but it just about still works.”
Isabel Mohan, The Telegraph

“For 17 years writers have laboured to create sympathy between and for this series’ leads. For 17 years they have remained stiffer than the stiffs they scrutinse.”
Andrew Billen, The Times

“Silent Witness trudges along from decade to decade like Casualty, but without the ingenious storylines, repertory cast or human interest… The 17th series began with the obligatory BBC crime motif of a topless female body on a morgue table. It’s an image so common now, you start to wonder whether the drama commissioners are driven by a fetish for necrophilia.”
Christopher Stevens, Daily Mail

“I was cheered to see Silent Witness back, kicking off a new season with a murky plot involving an unpopular and philandering footballer. My only gripe is the premise that any modern Premier League footballer would be ruined by the leaking of a sex tape. By current standards I would have thought it would do his career no end of good.”
Matt Baylis, Daily Express

“Apart from the occasional descent into Top Gearism, Jeremy Clarkson actually does a splendid job. Out of a car, and on a subject he’s passionate and moved and angry about, he’s not just good, he’s … dare I say it, almost likable.”
Sam Wollaston, The Guardian