“For a story with so much incident, it was curiously slow moving.” Read on for the verdict on last night’s TV. 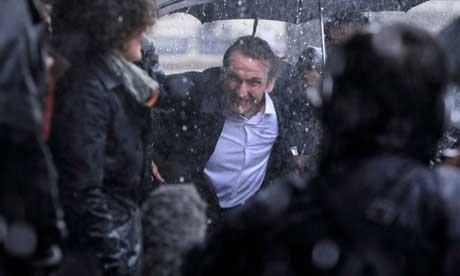 “You can see how Blackout’s creators have put flecks of Macbeth, and even The Killing in the mix, with its blend of political drama, morality play and crime thriller, but none of it works.”
Arifa Akbar, The Independent

“Eccleston, at least, is familiar with this pathologised municipal milieu, having starred in Peter Flannery’s much superior Our Friends in the North. Writer Bill Gallagher, who previously adapted Lark Rise To Candleford, seems more adrift…Director Tom Green is uncertain too: he has some superbly moody images of rain-slicked streets and boldly lit interiors, but the opening clunky montage had Eccleston swigging so frequently from a vodka bottle that it set an unintentionally comic tone.”
Stuart Jeffries, The Guardian

“For a story with so much incident, it was curiously slow moving, so much so that the attention began to wander as Demoys embarked on another stroll through the hospital corridoes, accompanied by a nurse who seemed to be playing the part of a guardian angel.”
Virginia Blackburn, The Express

“However much you resent Oliver for his irritating Jamie-isms (“this is proper!” he kept exclaiming as he ate) and the subliminal “lovely lifestyle” messages his shows can convey (the cooking was combined with shots of beautiful people dancing and eating ) the show was – and I say this grudgingly – very watchable.” Arifa Akbar, The Independent

“I’m learning to like Jamie Oliver: the mockney patter that made me once seek a restraining order on behalf of my telly now seems an imposture of a piece with his misplacedly upbeat vision of a better Britain – one that’s undone by our total culinary uselessness and rubbish weather.”
Stuart Jeffries, The Guardian

“The details of how some people died or were maimed were almost too painful to listen to yet it was absolutely right their stories should be told.”
Virginia Blackburn, The Express

“Ben Anthony’s documentary was like an episode of 24 Hours in A&E but a million times magnified. What an uncomfortable mix: the soft style of storytelling, letting each individual lilt out their experiences – and the cripplingly cruel nature of what they were saying.”
Alex Hardy, The Times