“A delightful piece of comic frippery that keeps well within the parameters of PGW’s spirit.” Read on for the verdict on last night’sTV. 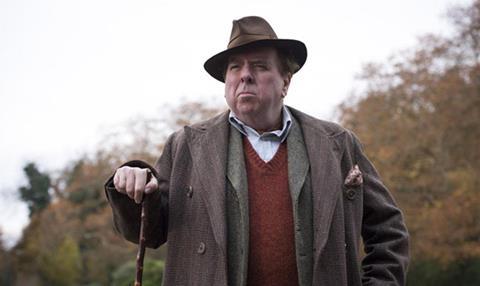 “It’s terribly silly. Of course it is: it’s based on Wodehouse. It’s also crisp and sharp, with lovely performances all over the shop. A delightful piece of comic frippery that keeps well within the parameters of PGW’s spirit.”
Sam Wollaston, The Guardian

“This episode began with a red-faced Duke of Dunstable (Harry Enfield) roaring through the house, while brandishing a poker. My reaction was similar when I discovered that The Fast Show’s Mark Williams, who played the butler, Beach, in series one, had been replaced with stand-up Tim Vine. Still, even minus Williams, Blandings is a lot of fun.”
Ellen E Jones, The Independent

“The plot, with its tangle of imposters, chance encounters and double-crossing felt more like a tidy comedy of errors than messy juvenilia. And there were grown-up jokes to match, as last series’ flatulence gags were replaced by flurries of stinging Wodehousian one-liners.”
Lucian Everett, The Telegraph

“Timothy Spall and Jennifer Saunders are playing for coarse laughs. They waddle, they burble, they spout steam. Wodehouse never had to do that — he simply relied on his inimitable turns of phrase. There’s no substitute for reading the originals.”
Christopher Stevens, Daily Mail

“I did wonder which viewing circumstances could make Blandings funny. In a baronial drawing room surrounded by great-grandchildren? Drunk? On your deathbed unable to read Wodehouse? Frankly, I think you’d need all three factors working for you.”
Andrew Billen, The Times

“An architectural style still synonymous in many minds with ‘concrete monstrosity’ is the perfect match for Meades, and, boy, did he do it justice. Like the work of that other great contrarian Adam Curtis, this was enjoyable as much for the spectacle of dexterous thought in action as for its revelations on any narrowly defined topic.”
Ellen E Jones, The Independent

“At a time when presenters are throwing themselves around more and more ridiculously, waving their arms in the air, marching towards you, waltzing with the bloody camera, it’s such a refreshing delivery. It makes you listen. It’s also a beautiful paean to concrete and scale and ambition, to architecture as art.”
Sam Wollaston, The Guardian

“Meades makes no apology for having a point of view, often an irritable, blood-pressure-raising one, and he puts it across in a way no one could possibly misinterpret. Meades is rather like a brutalist building himself, sombre, granite-faced, hectoring and making no apology for it.”
Matt Baylis, Daily Express

“Dressed in a Blues Brothers suit, his tie slightly awry, his weather-pocked face immobile, he stood in landscapes as jarringly and belligerently as the monolithic grey Daleks he defended. It was ugly but magnificent.”
Andrew Billen, The Times

“A test of fuel efficiency ended up with both Clarkson and May straying into the post-apocalyptic centre of Chernobyl. They got out of there and weren’t obviously glowing afterwards. What trickery was involved, I have no idea. But this was undoubtedly one of the eeriest, most spine-chilling sequences I’ve seen on Top Gear.”
Gerard O’Donovan, The Telegraph

“Now in its 21st series, Top Gear hasn’t even got any rubbish ideas left. The barrel’s been scraped bare. Driving a Ford Fiesta across Ukraine was a stinker of an idea — to base a whole show around it was painful. A Soviet-era propaganda film about wheat harvests would have been more entertaining.”
Christopher Stevens, Daily Mail