“Regardless of what you think of Johnson’s politics or predilections, the man is TV gold.” Read on for the verdict on last night’s TV. 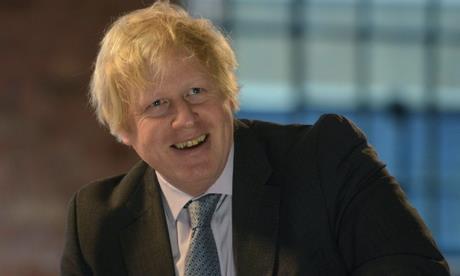 “Regardless of what you think of Johnson’s politics or predilections, the man is TV gold. In the name of journalistic objectivity Cockerell’s film dutifully included musings from Boris’s sister Rachel, his father Stanley, former editors and school chums. Some of it was moderately revealing, but the money shot was the blond bombshell, live and unleashed. Cockerell is undoubtedly a fine reporter; on this evidence he is also a wily film-maker.”
Benji Wilson, The Telegraph

“It was like This Is Your Life reformatted as This Is Your Political Death. Boris Johnson: The Irresistible Rise was not only compelling but discredited Cockerill’s theory from his documentary last year, The Lost world of the Seventies, that they don’t make political eccentrics like they used to.”
Andrew Billen, The Times

“With the help of Boris’s cheerfully indiscreet sister, Rachel, it offered something more than just entertainment… It was a programme full of clever, unshowy story-telling, starting with the emblematic opening sequence of Boris playing tennis with his brothers and sisters, flailing about with an ancient wooden tennis racket. What you saw summed him up – a complete indifference to sartorial dignity, a naked flame of competitive instinct and a dogged commitment to the archaic, usually expressed by his vocabulary but here signified by a racket that looked as if it had been stored behind a radiator since 1936.”
Tom Sutcliffe, The Independent

“It’s nicely done. Cockerell might not give him the full Eddie Mair-over, but nor does he give him an easy ride… It’s fabulous to watch – not just because of Cockerell’s fine work, but mainly because of the subject matter. How many other politicians could stuff an hour of television with so much joy-horror?”
Sam Wollaston, The Guardian

“If you are interested in characters and personalities and what shapes them, this modest probe by veteran political broadcaster Michael Cockerill was quite engaging… I certainly felt more inclined to trust the insights of the two brilliant, thoughtful woman who are Boris’ mum and sister than I did to trust anything from Boris himself. Perhaps that was the reason this felt like a doughnut-shaped programme. The man at the centre was only ever going to do his number on us – a routine, composed of seeming a bit dotty at the same time as being awfully, brilliantly quick-witted.”
Matt Baylis, Daily Express

“A lovely performance by Tim Pigott-Smith in the title role of Nigel Williams’s Wodehouse In Exile. I’m afraid PGW doesn’t come out of it brilliantly. Maybe not a traitor, but so naive for not seeing that the Germans were using him as propaganda.”
Sam Wollaston, The Guardian

“This was a classic BBC Four ‘inspired by real events’ film, and it bounded on at a suitably Woosterian lick. Writer Nigel Williams cast Wodehouse as a sweet old man who wouldn’t say boo to a goose, let alone to an unctuous Nazi. It was only later in the piece when Wodehouse’s wife Ethel finally let him have it with a blast of indignation that you began to question whether a man of such brilliance could really have underestimated the impact of his own words to such calamitous effect.”
Benji Wilson, The Telegraph

“Tim Pigott-Smith was touching as Plum, dismayed to find that what he thought was a show of stiff upper lip was taken as betrayal. But the drama was often far too direct in its manner. It doesn’t get you off the hook if you end one of those scenes in which one party tells the other what they already know, with, ‘Do I have to spell it out for you?’ – it just beds the hook deeper.”
Tom Sutcliffe, The Independent

“The film starred Tim Pigott-Smith as Plum, marched off to a Nazi internment camp and then elevated to a hotel where he was encouraged to broadcast to America in talks that mad light of his incarceration (making light was his trade). His exasperated wife, played by Zoe Wannamaker, called him ‘a very clever man pretending to be stupid for some reason’… But his stupidity, like his niceness, and like the world he created in his books, was his escape from a reality he never quite signed up to.”
Andrew Billen, The Times

“Plebs is like The Inbetweeners in ancient Rome. Very puerile. I’ve series linked it, obviously.”
Sam Wollaston, The Guardian