“It is the most old-fashioned comedy on television.” 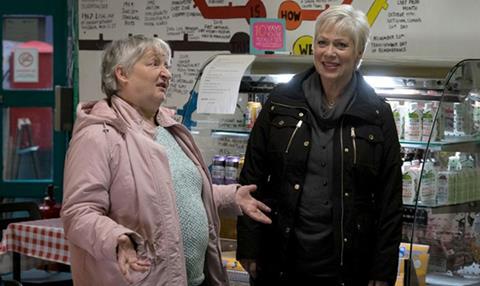 “Elliott Kerrigan created the transgender sitcom Boy Meets Girl but it might as well have been written by Carla Lane, who was notable for comedies that, despite being scarcely funny at all, were popular because viewers wanted to know what would next happen to their characters. It is the most old-fashioned comedy on television.”
Andrew Billen, The Times

“The groundbreaking element is housed within a format so relentlessly, rigorously traditional that the effect is a little jarring. But Boy Meets Girl is hard not to like – it would be hard not to like anything so gentle and well-meaning, full of hugs and wry smiles.”
Tim Dowling, The Guardian

“Boy Meets Girl doesn’t know whether it wants to be an improving single-issue public-service drama or a crude backsliding comedy. But the real problem is the two lovebirds. The reality is that Judy is not much fun at all. She’s careful and actually quite dull. Maybe that’s the point.”
Jasper Rees, The Telegraph

“For a couple so apparently in love, Leo and Judy seem to lack any spark, kissing demurely on the cheek in one scene as if they were just friends. There is not a whiff of passion in their relationship and when Leo got down on one knee it was a rather wooden affair. Ant and Dec have more on-screen sexual chemistry than this pair.”
Daisy Wyatt, The i

“In last night’s episode the situations were closer to the emotional dilemmas of a drama. It was like an episode of EastEnders but done in far less time, with characters you hadn’t had quite so long to warm to. More rather than less of it might be the answer. Even if some critics don’t like it.”
Matt Baylis, Daily Express

“If nothing else it made me realise that those magical landscapes of lost, long ago childhood I never read so much about aren’t just fictional idylls. They’re real places, they’re mostly still there, and if I want I can go and visit them. Then again, that’s what my TV is for.”
Tim Dowling, The Guardian

“But for the obvious difficulty, Britain’s Lost Waterlands would have made a perfect episode of Coast. Structurally, however, this was a strange programme. Its two presenters could hardly have been more different: the boyish, overweight and over-moustached engineer Dick Strawbridge on the one hand; the svelte, sensible Professor Alice Roberts on the other.”
Andrew Billen, The Times

“Dick is such a large personality that he didn’t leave much room for Prof Alice’s more measured contributions. In fact, the show was crying out to be a three-parter: since the nation’s seaside-inspired Coast is a magazine series that has run for years, it seems wasteful to cram all the waterlands into a single hour.”
Christopher Stevens, Daily Mail

“In a Ransome-themed version of Coast, presenters Dick Strawbridge and Alice Roberts visited the various watery locations of the children’s classics. They didn’t mention his [Ransome’s] fondness for Stalin last night but if I was Stalin and I had read Swallows And Amazons, I’d be thinking it was about a rich place, ripe for revolution.”
Matt Baylis, Daily Express

“Conceptually, a programme that pottered about in boats, admired the view, did a spot of birdwatching and took a vague interest in agriculture and industry didn’t quite hang together. Britain’s Lost Waterlands must have looked sound, as a committee gussied it up on a drawing board. On the small screen, it barely resonated.”
Jasper Rees, The Telegraph

“Versailles has been going for six weeks and nothing has really happened. Because most of the cast never move, they have taken to passing each other notes, hidden on trays of cutlery, inside shoes and, in one desperate instance, under a pineapple. Stuffed into a turkey would be more appropriate.”
Christopher Stevens, Daily Mail