“Given the abundance of talent and potential material available here, this comedy just isn’t sharp enough.” 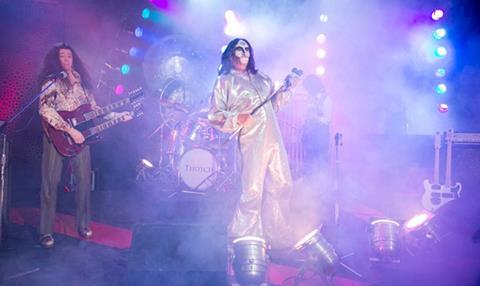 “There were too many ligging thesps, Fast Show chums and old rockers doing their captivating turns. I want Simon Day to grandstand as he did 20 odd years ago in the manner of his greatest comic creations – eco warrior Dave Angel or Performance Dad or Lairy Pub Bore – rather than play second fiddle to his showbiz mates as if he were busted down from Thotch frontman to string section nobody.”
Stuart Jeffries, The Guardian

“Despite the brilliance of the set-up, the laughs were lacking, representing a decline in quality when compared to earlier outings. Ultimately, the jokes weren’t always well executed and the ending predictable. Given the abundance of talent and potential material available here, this comedy just isn’t sharp enough.”
Catherine Gee, The Telegraph

“For those who missed the first series, it’s a gloriously funny spoof about an ageing rocker. Sharp, cleverly observed and very funny — let’s hope Peter Gabriel has a good sense of humour, too.”
Claudia Connell, Daily Mail

“Following David Bowie’s death, perhaps it was not the best week to reintroduce us to Simon Day’s Brian Pern. Could it have been funnier? Maybe. Was it funny enough? Certainly.”
Andrew Billen, The Times

“The meticulous, painstakingly detailed detective work made for fascinating television. Indeed, when too many programmes that should be 30 minutes long are invariably dragged out to an hour, this documentary ought to have been extended since there was so much story to tell.”
Claudia Connell, Daily Mail

“If the Nineties’ drama NYPD Blue believed confessions made convictions, the involving, if downbeat, documentary Busting the Drugs Millions explained that the way today is watching and waiting. Director Toby Trackman relied heavily on police surveillance footage and, perhaps, could have done even better without the dramatic reconstructions used to link it.”
Andrew Billen, The Times

“In a script that might have made the late Frankie Howerd blush (titter ye not) with its saucy euphemisms, Chris Packham certainly succeeded in catching my attention, waving his dirty great innuendo around like that. Just as well that I appreciate a bit of anthropomorphic smut as much as the next BBC2 viewer.”
Sean O’Grady, The Independent