“It was hard not to ponder whether the subjects had some say in a largely favourable portrayal.” 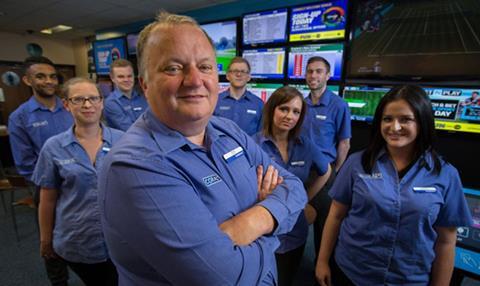 Britain at the Bookies, BBC1

“This new documentary series began by giving a whimsical treatment to a not-so-whimsically subject: as one gambler confessed he’d lost everything because of his habit, the plinky-plonky music chimed in, incongruously, light-heartedly. However, eventually there was more clarity about the industry.”
Andrew Billen, The Times

“It’s a good subject, with an important issue at its heart. I’m glad it doesn’t just focus on jolly Tony and his smiley staf but also on compulsive gambler Stuart who kindly hands his fortnightly benefits straight over to William Hill, Betfred, Tony’s Coral etc. There could have been more on that side of things though – the misery on which the industry is based.”
Sam Wollaston, The Guardian

“As with recent series such as The Billion Dollar Chicken Shop or The Met, it was hard not to ponder whether the subjects had some say in a largely favourable portrayal. The banter was of the sort you’d expect to hear in any office, while visits to Coral’s London HQ brought little more than PR puff. You’d get long odds on me tuning into this listless affair again.”
Gabriel Tate, The Telegraph

“Britain at the Bookies is merely the latest in a long line of also-rans. It partly peers, patronisingly, at some lovable hard-up folk in a Huddersfield bookmakers. It also sits in on meetings at the bookies’ HQ wher. More interesting than any of them was last night’s star turn, Stuart, a compulsive gambler who regularly had no money for food.”
Matt Baylis, Daily Express

“As part one quickly made apparent, gambling is a mug’s game. Britain’s betting shops are a long way from the glamour of a Monte Carlo casino. Here, it was mostly pensioners quietly frittering away their winter fuel allowances on the races, while Tony busied himself wiping sweaty fingerprints off the fixed-odds betting machines.”
Ellen E Jones, The Independent

“Historian Lucy Worsley was the perfect person to help sum up this organisation’s essential character. Her companionable, yet still inquiring conversations with fellow academics and current WI members celebrated the organisation’s unsung heroines, while also confirming that there is some truth behind the stereotype of the bossy, middle-class woman who always knows what’s best.”
Ellen E Jones, The Independent

“The film did well to tackle that curious mix of deep tradition and brave radicalism; of rebellion and compliance: and to unveil some of the movement’s more unexpectedly thorny moments.”
Andrew Billen, The Times

“According to Leftie Lucy, the WI is not so much ‘jam and Jerusalem’, more Karl Marx and the Red Flag. Far from confining themselves to recipes and knitting, the middle-class ladies of England have apparently always been a bunch of socialist firebrands. What blithering nonsense.”
Christopher Stevens, Daily Mail

“This is lookalikes plus; not just another observational documentary about an agency and the people on its books, but scripted (or structured as they now seem to be calling it) reality. Into the pot goes celebrity, reality TV, script, structure, everything and everyone else; it eats itself, vomits itself up again, then eats itself again. Hilariously though.”
Sam Wollaston, The Guardian

“Lookalikes has the feel of a series that looked brilliant on paper, and promptly failed to live up to its potential. It hardly ever felt like the fault of the people in front of the camera. Rather it seemed to be an all-too-real lack of imagination from the programme makers that let the side down.”
Gerard O’Donovan, The Telegraph