“Britain’s Poshest Nannies was like the introduction to a good documentary, with its juicier second part missing.” 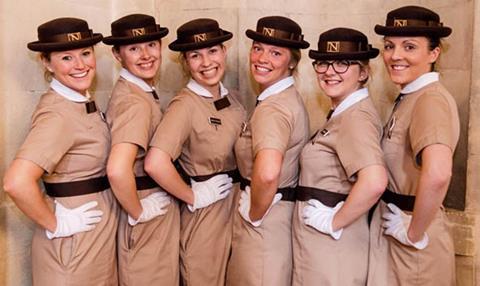 “The programme seemed to be deliberately leaving out stuff in its bid to appeal to my inner moron. In the end, though, the nannies won me over. They were sweet and committed, and not one of them seemed to be in it for the chance to take Beyoncé’s kid to swimming.”
Tim Dowling, The Guardian

“Does Norland training actually make them better nursemaids? Since this documentary never followed up with the students after they’d settled into their high-society placements, we couldn’t be sure. Britain’s Poshest Nannies was like the introduction to a good documentary, with its juicier second part missing.”
Ellen E Jones, The Independent

“They were all young women to make any parent proud, with their name badges straight and their hair in smart buns. But there was a crucial component missing, and without it this documentary was dull fare. It needed babies.”
Christopher Stevens, Daily Mail

“As an advertisement for Norland College, Britain’s Poshest Nannies was as resounding a success as the programme was a failure. In the ITV hour available to him, director Iain Scollay found not one stand-out character among the staff or pupils, discovered not a single tearily homesick student and recorded not the slightest rebellion.”
Andrew Billen, The Times

“As a corporate video, this couldn’t have sold Norland harder. As a TV documentary, charming though it undoubtedly was, it barely scratched the surface of these young women’s lives and attitudes.”
Gerard O’Donovan, The Telegraph

“The trouble was that BBC forecaster John Hammond and physicist Helen Czerski weren’t sure what they believed themselves. Every time we thought we’d learned something, it was overturned. Complicated charts explained it in vivid reds and blues. And then we were told to forget all that, because the evidence was inconclusive.”
Christopher Stevens, Daily Mail

“For those of us whose familiarity with that natural phenomenon the jetstream extended no further than the word, there was a useful guide to how the various air masses that govern the world’s weather work. From what I could gather, though, it’s all down to climate change. Or, maybe not. Or only partly.”
Gerard O’Donovan, The Telegraph

“By the end they seemed to have forgotten that ‘What’s wrong with Britain’s weather?’ was their question, not mine.”
Tim Dowling, The Guardian

“In the geographical sense at least, documentary-maker Tim Samuels went further than the likes of Nick and Margaret have ever bothered to. He actually got on a plane and visited the home village of Romanian-in-London, Ion, 60 miles outside Bucharest. Now we begin to understand why three weeks of sleeping rough might appeal.”
Ellen E Jones, The Independent