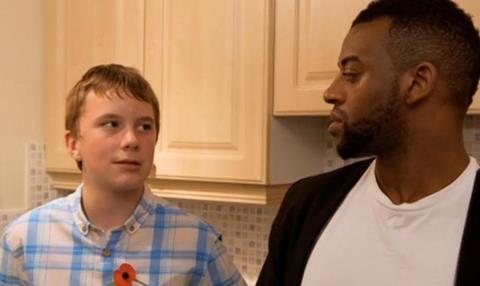 “There were tears (on screen, and in my house). Oritsé Williams was great throughout. Sometimes, the celebrity angle comes good.”
Bim Adewunmi, The Guardian

“I am dismayed that the sad subject covered by his heartfelt documentary was given such scrappy treatment. Most documentary makers would have got better interviews out of the children than Williams did, would have talked to their teachers about the effect on their education and would have banged on a few doors demanding justice.”
Andrew Billen, The Times

She’s Having a Baby, Sky Living

“Sky is in the midst of making its lifestyle channel, Sky Living, less female-facing in a process it is calling ‘de-pinking’. She’s Having a Baby managed to single-handedly dismantle that strategy with one long girly consumer binge, complete with spray-tans, manicures and a ‘baby shower’ with pink balloons and pink cupcakes.”
Gerard Gilbert, The Independent

“These shows usually offer fresh furnishings and a lick of paint to a deserving family. Channel 5 sees it differently. If you want a visit from Linda Barker, it’ll clean out your holiday savings for the next two or three years. Brand New House might look low-rent and tawdry, but it could be the future of television.”
Christopher Stevens, Daily Mail

“Low-budget the show may be, but it can’t be long before Channel 5 steals the concept and does a really cheap version, trawling through charity shops. They can call it Dress Like A Tramp For A Tenner.”
Christopher Stevens, Daily Mail

“Despite so many good performances, not least from Matt LeBlanc, and some decent set-ups, Episodes rarely actually caused laughter.”
Andrew Billen, The Times