“If little Bobby Beale from EastEnders had popped round to bash both the girls to death with his music box, no one could have cared less.” 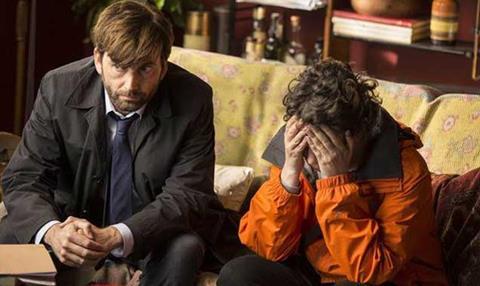 ‘“Set the record straight, and we can all get released from this,” said DI Alec Hardy to Sandbrook suspect Lee Ashworth, in last night’s Broadchurch finale. Release was exactly what swathes of the audience wanted too, after a second series that was often tortuous in its layering on of superfluous subplots. Well, yesterday that release came, with the long-awaited trial verdict from the original Broadchurch case, and the truth behind what happened in Sandbrook. No spoilers here, except to say what we have long known anyway: that life doesn’t always give the answers you want or deserve.”
Alex Hardy, The Times

“Underwhelmed by the silly conclusion to Broadchurch’s second series? At least no one can claim it took them by surprise. Broadchurch has been foreshadowing its own damp squib demise for weeks now. The clues were there in those unrealistic court scenes, the twelve or so minor subplots which no one really cared about, plus more red herrings than Billingsgate fish market after a crimson paint spillage.”
Ellen E Jones, The Independent

“The Sandbrook sub-plot had been set up so badly that the solution was irrelevant. Whoever did it, we just were not interested. If little Bobby Beale from EastEnders had popped round to bash both the girls to death with his music box, no one could have cared less.”
Christopher Stevens, Daily Mail

“I’m glad I stuck with Broadchurch; this last episode was easily the best of the bunch. The final confession scenes were every bit as dramatic as anything in the first series. Broadchurch has secured and stowed all loose ends, but there’s still plenty of scope for series three.”
Tim Dowling, The Guardian

“Phew! So Broadchurch delivered a punchy final episode that just about managed to tie up the confusing plot strands thrown at us over the past eight weeks and even displayed one or two flashes of the brilliance for which we loved it first time round. Even this episode wasn’t wholly convincing, though. That the self-confessed child murderer Joe Miller could finally be acquitted was easy enough to swallow. Not least as he’d been tried at the hands of two of the least convincing, least competent and certainly most irritating barristers in recent TV history.”
Gerard O’Donovan, The Telegraph

“I have a wee problem with Catastrophe. Two, in fact. Horgan and Delaney. Or, more accurately, their screen alter-egos ‘Sharon’ and ‘Rob’. Don’t get me wrong, I love these guys. Funny, beautiful, charismatic, talented, lovely, cheeky… you see where I’m going with this? They’re just too darn nice and so’s the show. Horgan and Delaney can do funny standing on their heads but series two could really sing if they ditch the sweetness and keep their claws out.”
Chris Bennion, The Independent

“This is a rare beast among current comedy hits. It’s dirty, yes — anything involving the making of a baby has to be, really — but also underplayed and authentic. A welcome change in tone, which deserves to be recognised come awards time.”
Alex Hardy, The Times

“I found myself rooting for Rob and Sharon, while simultaneously hoping Catastrophe wouldn’t patronise me by giving in. It takes considerable skill to make the viewer walk such a tightrope over six episodes, but how do you finish with a wedding and not spoil it with a happy ending? Catastrophe managed admirably, with a wedding-night fight and a final crisis.”
Tim Dowling, The Guardian

“My jaw dropped when I sat down to watch the fourth part of A Cook Abroad, which involved chef and MasterChef judge Monica Galetti “doing” France. Just where would she start, I wondered? Wisely, and in keeping with the personal tone of the whole series, Monica stuck to the lesser-known region that her husband hails from, the Jura Mountains. What’s so enchanting about French food is not the taste but the seriousness with which the people go at it.”
Matt Baylis, Daily Express