TV Critics: Broadchurch; Girls; What's the Right Diet for You?

“Blimey, the second series of Broadchurch isn’t hanging about.” 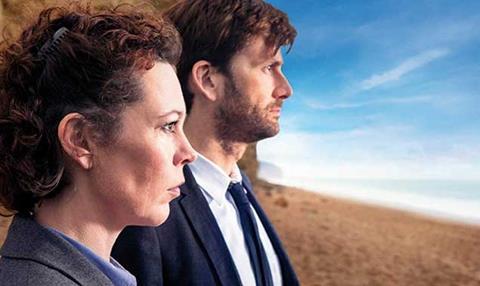 “For viewers hoping to enjoy a return to the original Broadchurch, where tragedy and betrayal ripped apart a mundane seaside resort, the second series could be a disappointment. From the first minute of this returning series, none of the legal details has felt remotely realistic. But allow yourself to be swept along by the hallucinatory pictures and music, and it becomes absorbing.”
Christopher Stevens, Daily Mail

“Although I was among the crowds baying for the return of Broadchurch, it was the second’s week episode that I really wanted to see. The struggle between former friends, DS Ellie Miller and the dead boy’s mother, is now being mirrored in the courtroom with the equally formidable duo of former colleagues, defence lawyer Sharon and prosecutor Jocelyn. Against the anonymous space of the courts and the dramatic Dorset clifftops, they remind us that the best crime stories have little to do with violence and everything to do with people, feelings, and relationships.”
Matt Baylis, Daily Express

“Blimey, the second series of Broadchurch (ITV) isn’t hanging about. For this second instalment, writer Chris Chibnall cranked up the narrative pace from “icily Scandi-like” to “24 with scenic sandstone cliffs instead of ticking digital clock”. It galloped along like a racehorse wearing rocket boots.”
Michael Hogan, The Telegraph

“Just like the writers of The Fall and Last Tango in Halifax, Chris Chibnall is trying to prolong Broadchurch. Unfortunately this attempt to protract the drama just feels painfully obvious tonight and lacks the subtlety of series one. The understated intrigue was the show’s biggest strength and kept us all hooked. But after this episode, viewers may be wondering if Broadchurch should have been a standalone.”
Neela Debnath, The Independent

“Tonight, Girls returned to Sky Atlantic for its fourth season with less fanfare than usual – indicating, perhaps, that the hype is over. The problem is that for a show still purporting to reflect kidulthood accurately, these friendships are surely too poisonous. Since when did Girls become a show driven by snideness and schadenfreude?”
Patrick Smith, The Telegraph

“Half of the pleasure of Girls is the hate-watching. We love to see these self-indulgent Brooklynite brats stumble over obstacles of their own making.  On the one hand, these twentysomethings really, really should have grown up by now. On the other, if they ever do stop acting like total nitwits, where will we get our Monday night lolz?”
Ellen E Jones, The  Independent

“With all the screeds written about the show, it’s easy to forget that Girls is a comedy. An awkward, twisted one, but comedy still. So the laughs came reliably: Marnie’s overly-invested stage mother, fixing her daughter’s hair and singing along to banal lyrics, Hannah’s backhanded toast at dinner with her parents, the wonderful Natasha Lyonne unable to pronounce “unconscionable” as she ripped into Jessa. Welcome back.”
Bim Adewunmi

What’s the Right Diet for You?, BBC2

“The idea was to prove to the overweight subjects that they could achieve anything, with enough self-belief and support from friends. It’s an appealing idea, but like most TV psychology it was too simplistic. It failed to understand that humans are not bundles of statistics who can be slotted into categories.”
Christopher Stevens, Daily Mail

“What’s the Right Diet for You? A Horizon Special may just change my life, your life, and certainly the lives of the 75 volunteers taking part in this diet study. If, like 64 per cent of Britons, you could stand to loose a few pounds, but have thus far been thwarted by the fact that biscuits are so bloody delicious… then this is the answer to your prayers: a diet specially tailored to address whatever hormonal, psychological or genetic issues are at the root of your weight gain.”
Ellen E Jones, The Independent

“Tailor the diet to the type, so the theory goes, and you might have lasting weight loss. Underpinning the whole scheme is a theory that overeaters fall into three categories, determined by genes, hormones and psychology. There are two more instalments to go but this, to me, seemed an admission that there really isn’t a “right diet” for everyone.”
Matt Baylis, Daily Express