“A pleasing adaptation that brings life to lovable characters, with strong performances from the ensemble cast.” 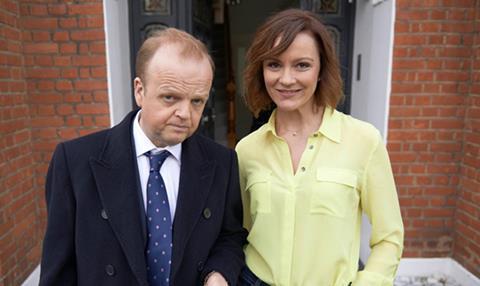 “John Lanchester – and in turn Peter Bowker and Euros Lyn, who have adapted and directed so excellently – have managed to squeeze an incredible amount into one street, one book, and then further squeeze into three hours of television. It’s a brilliant allegorical portrait of London.”
Sam Wollaston, The Guardian

“For viewers unfamiliar with the book, it may not have quite enough intrigue to keep them coming back for more. That said, the drama is a pleasing adaptation that brings life to lovable characters, with strong performances from the ensemble cast.”
Daisy Wyatt, The Independent

“Euros Lyn’s direction has its moments, but it is alternately too jaunty and over-obvious, incidental music telling us when to smile and when to be really afraid. The main faults, however, are the novel’s colour-by-numbers sociology. Capital doesn’t tell us much we do not already know.”
Andrew Billen, The Times

“This was no Dickensian bird’s-eye view, but an overly schematic tangle of under-developed plotlines populated by underwritten characters. Yet it was liberating not to be anchored to an overarching storyline and to enjoy, instead, a series of vignettes of characters who represent our capital in all its baffling and beguiling forms.”
Ben Lawrence, The Telegraph

“What a staggering, heart-wrenching way to begin. Capital delivered a perfect drama in the time it took the opening credits to roll, a two-minute novel of love and loss with a soundtrack to snatch your breath away. It failed to maintain this standard. Like any satire, all this was sometimes too clever for its own good.”
Christopher Stevens, Daily Mail

“The bankers are horrid caricatures of the white middle classes to be used solely for comedy. Everyone else is real and, to a far greater extent, easy to sympaphise with. That doesn’t stop Capital being witty and watchable. But it might force us to lower any great expectations.”
Matt Baylis, Daily Express

“It was good to hear that there is indeed the wrong sort of snow, that someone has the title Leaf Fall Scheduler, and that the engine that pushes the Scottish snowplough was made in 1962 and has three million miles on its clock. Actually, that last fact was a little worrying, but the portrait of these heroic grafters was as inspiring as the film’s landscapes of a very frozen winter.”
Andrew Billen, The Times

“Emergency! Trains v Weather tried to give the impression that only extreme acts of God can prevent the railways from running on time. But that doesn’t explain all the usual excuses, such as ‘waiting for a driver’ and ‘staff sickness’. A more honest documentary would be called Trains v Commuters.”
Christopher Stevens, Daily Mail

“Given the highly sensitive subject matter, The Truth About Child Sex Abuse dealt with the facts admirably. It did not demonise the perpetrator or sensationalise stories of abuse, but showed compassion for victims, as well as those who suffer from disturbing sexual feelings.”
Daisy Wyatt, The Independent