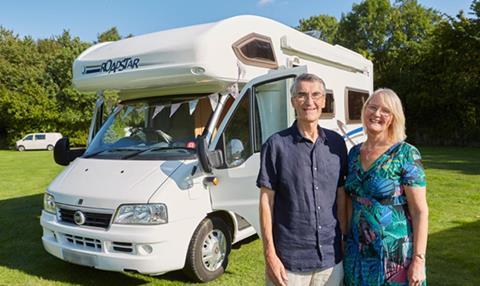 Caravanner of the Year, BBC2

“Culture secretary John Whittingdale wants the BBC to be more distinctive. He should be careful what he wishes for. No other broadcaster would make a show like Caravanner of the Year, and there’s a good reason for that. Ice Ages have passed in the time it took to watch an elderly gentleman coax his wife into reversing their motorhome around a hay bale.”
Gabriel Tate, The Telegraph

“Caravanner of the Year isn’t just a weird idea for a TV programme; it’s a weird idea for a thing. One develops a renewed admiration for The Great British Bake Off, for the straightforward rigour of its assessment criteria, when you watch 12 caravanners enter a race to put up their awnings and make a cup of tea.”
Tim Dowling, The Guardian

“The competition itself made no sense at all. Comparing caravans with motorhomes and campervans is like running a derby with some of the horses still in their trailers. As a celebration of the eccentricity bred by endurance — or a metaphor for long-enduring marriages — it was lovely.”
Andrew Billen, The Times

“Caravanner Of The Year looked a good idea in the brochure. Family adventures in a sardine-can on wheels are part of the Great British childhood. But the producers had no idea how to evoke that atmosphere. This was all as ill-judged as a barbecue weekend at Skegness in February.”
Christopher Stevens, Daily Mail

“The success of The Great British Bake Off might have spawned hopes of all sorts of unlikely pastimes turning into hot, prime-time national obsessions. I’m sure all the caravan judges’ lame jokes about erections were an attempt to get some Paul n’ Mary style banter going. That was a shame and a reminder that wacky ideas are best done seriously.”
Matt Baylis, Daily Express

“Tom Stone’s documentary focusing on the murders of David Miller and Hannah Witheridge in 2014 was very worrying: six westerners dead in suspicious circumstances in two years. As an investigation it failed, however, for it could not decide if the two young Burmese migrants convicted of the Miller-Witheridge murders were guilty.”
Andrew Billen, The Times

“Even at an hour Murder in Paradise felt incomplete, padded out with superfluous interviews and leaving the local mafia as a shadowy phenomenon. While it didn’t want for courage, it lacked investigative rigour and clung with annoying persistence to the historical present when describing events. But this was nonetheless a chilling documentary.”
Gabriel Tate, The Telegraph

“Five Star Babies, like all those documentaries about high-end hotels and estate agents, presented plenty of material to jeer at. It also sidestepped all the important questions, presumably because it had to in order to gain access to this exclusive maternity hospital.”
Matt Baylis, Daily Express