“This programme struggled to use up its minutes efficiently.” Read on for the verdict on last night’s TV. 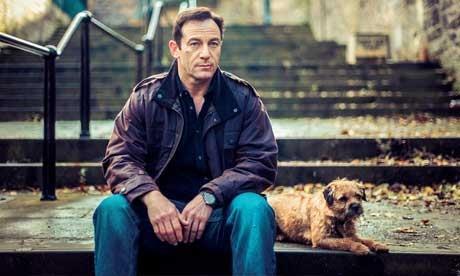 : it meandered, it twiddled its thumbs, it stared up at a dirty sky and some glowering Edinburgh terraces, and finally reached a reasonably satisfying conclusion at a point by which I fear a high proportion of its viewers would have switched over”.
Serena Davies, The Telegraph

“Never watch children or animals”, on account of the way in which they can so easily lure narratives into cuteness or a deceptive sentiment. There’s a bit of that with the dog, a hovering threat of cosiness.  But Peter Harness’s adaptation, and Isaacs’ melancholy performance, kept it in check.”
Tom Sutcliffe, The Independent

“While 2012 was all about “Poor Engelbert Humperdinck” this year’s ever-present Nortonism soon became “Poor Bonnie Tyler” as it quickly became apparent that the decision to entrust British hopes with a well-known singer from yesteryear had once again failed to cut the mustard.”
Robert Meakin, The Independent

“It wouldn’t be Saturday night without a Scandinavian crime drama. This weekend the action moved to Malmö in southern Sweden. The sensible knitwear was replaced by glittering spandex and the only thing murdered were pop songs.”
Barry Neild, The Guardian

“It is the show where nations set aside their differences and pretend to care about what passes for pop in Belarus, glory in the shared values of simple chord sequences and singalong melodies, and thrill to the realisation that blow dried windswept hair looks exactly the same from the valleys of Wales to the furthest reaches of the Georgia”.
Neil McCormick, The Telegraph

“Words from the man himself juggled with those of that fine American novelist Jay McInerney who, in delectable contrast to the current woeful habit of sticking celebrities in front of things and places they know nothing about (Fiona Bruce expounding on Leonardo for instance), had been asked to present this film.”
Serena Davies, The Telegraph

“Once the obligatory film clip had been got out of the way at the beginning, it turned out to be a thoughtful literary profile, pointing up some illuminating cross-overs between Fitzgerald’s private and public writings”.
Tom Sutcliffe, The Independent