“The humour is clumsy, the plotlines are laboured and it just isn’t funny enough.” Read on for the verdict on last night’s TV. 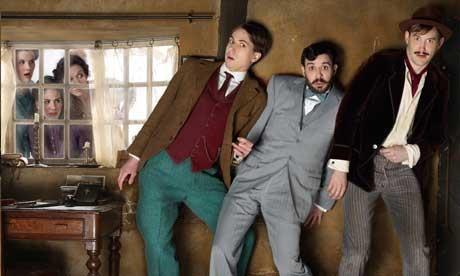 “I watched as a fan of The Inbetweeners and its stars, Simon Bird and Joe Thomas, who joined fellow Cambridge Footlights man Jonny Sweet for this new sitcom. I wanted to like it, but, Christ, it was tough… It is at best, I say with regret, a Footlights sketch on a bad week.”
Simon Usborne, The Independent

“I loved The Inbetweeners and I enjoyed this. And with luck it will get even better when the characters have settled in and Barry Humphries makes an appearance.”
John Crace, The Guardian

“In its favour, Chickens gives an underlying impression of intelligence and the performances are enthusiastic but it still has all the faults of the pilot: the humour is clumsy, the plotlines are laboured and it just isn’t funny enough.”
Terry Ramsey, The Telegraph

“Too often, the jaunty soundtrack had more bounce than the gags. In one gag about women, the writing pushed no further than knitting, shaving legs and doing laundry. I know this is 1914, but come on.”
Alex Hardy, Sky 1

“Take David Attenborough, roll back the decades, add a hunk of Ross Kemp, and a slab of a less-posh Bear Grylls, and you’ve got your Tom Hardy. These attributes and a fondness for big animals were all the qualifications Hardy needed to explore the desperate plight of elephants and rhinos in Poaching Wars with Tom Hardy. But it didn’t matter: he was an engaging, intrepid guide.”
Simon Usborne, The Independent

“Hardy stared at the camera through his expensive shades, nonchalantly chewing a match. Rarely has anyone looked so hot in beige. Soon, though, this became a disturbing snapshot of a deeply complex problem, soaked in issues of race, international organised crime and SAS-style ‘rhino assasins’.”
Alex Hardy, The Times

“Having established that rhinos and elephants are threatened with extinction, rather too much of this programme was taken up with Tom and not enough on the actual nature of the war itself.”
John Crace, The Guardian

“Although last night we were treated to another famous name in exotic parts, this time it wasn’t a self-important luvvie on his hols. Rather, Poaching Wars With Tom Hardy was an admiral piece of programming.”
Virginia Blackburn, Daily Express

“It’s hard to get through an evening’s viewing without at least one programme about obesity, heart disease and death. While covering much the same topics, Jacques Peretti’s series The Men Who Made Us Thin has been a welcome corrective to the general trend.”
John Crace, The Guardian

“As we have grown to expect from Trollied, the humour is old-fashioned and occasionally coarse. It’s like Benidorm but without the subtlety.”
Terry Ramsey, The Telegraph

“Unusually for the Beeb these days, O’Grady wore a tie in segments of the show. Could this be sound working-class values telling him to always look his best? If so, bring them back.”
Virginia Blackburn, Daily Express