“The tone of the series is about right. Not snarky or sneery, more celebratory but still able to see the funny side.” Read on for the verdict on last night’s TV. 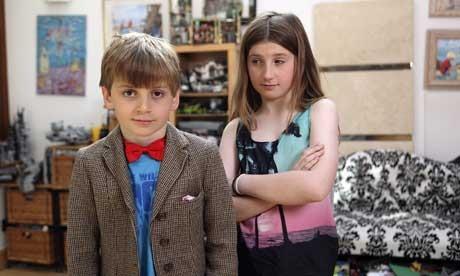 “As the programme opened, I knew what I was about to get: hot-housed mannequins with huge vocabularies and a tiny understanding of how to get on with others… There was nothing deviating from the formula in this programme, and only some vague attempts to disguise it.”
Matt Baylis, Daily Express

“I worried about some of the competitors… Josh, a chess prodigy at just eight, almost had a real panic attack as he was thrown into battle by his mother… I wanted to jump through the screen and whisk him off to Alton Towers.”
Simon Usborne, The Independent

“They’re all nice – Shrinidhi and Hugo, eight-year-old chess superstar Josh and 10-year-old all-rounder Longyin who lives in a house called Wits End in Devon. Of course their parents are at least as interesting as they are, and this is just as much about them… The tone of the series is about right. Not snarky or sneery, more celebratory but still able to see the funny side.”
Sam Wollaston, The Guardian

Agnetha: Abba and After, BBC1

“Agnetha: Abba and After was fascinating about Abba, less so about After. There’s a new project, involving Gary Barlow. Here he is being obsequious. Have the Windsors got bored with him and booted him out, so now he’s bothering Swedish pop royalty instead?”
Sam Wollaston, The Guardian

“As a portrait of Agnetha, the documentary was most revealing when it ventured into lesser known territory, dealing with her pre and post-Abba years… While an attempt was made to get to grips with her home life, Agnetha proved too well-versed in reticence to give much away… Her relationship with her one-time stalker was all but passed over, as was the reason why she’s made a come back at all.”
Paul Clements, The Telegraph

“If Agnetha does harbour a great secret, this was not the programme to expose it…  In her interview, Agnetha said very little, very charmingly, in return for an unashamed plug… The documentary’s highlight was a clip from an Alan Whicker film.”
Andrew Billen, The Times

“It was week two at The Call Centre and the producers were running out of ways to make the real-life Office interesting… Confected storylines involving lovelorn employees and an X Factor-lite ‘voice of the Welsh call centre’ competition offered zero drama… Truth can be stranger than fiction but it needs to be more entertaining than this to create a bearable hour of telly.”
Simon Usborne, The Independent

“It was strangely affecting to see Nev, Cupid in a Polyester suit, tirelessly ask every unattached girl in the office to go on a date with the thoroughly nice but socially awkward George… Of course, it was preposterous, but the fact is that no BBC3 viewer wants to see a documentary about how Nev Wilshire’s company sells cavity wall insulation or hear his stance on payment protection insurance. They want a big-hearted entertainer, a great Jehovah to guide them. And Nev Wilshire has done just that.”
Ben Lawrence, The Telegraph

“The O Henry-style twists are not what makes this series of short plays so rewarding. It is the perfect matching of smart acting to cruelly accurate dialogue… Now that The Fall’s ended you won’t see better TV acting than here.”
Andrew Billen, The Times

Gibraltar: Britain In The Sun, Channel 5

“One of the many things that intrigued me about Gibraltar: Britain in the Sun was the amount of times people called it paradise. It looked more like a hot Maidstone to me. [But] I began to see what all these people were on about… It had nothing to do with swaying palm trees and hula-hula girls, rather everything to do with being unconnected to modern British life.”
Matt Baylis, Daily Express