TV Critics: Clangers; The Met; How To Be Bohemian

“If your kids don’t like it, they have no taste.” 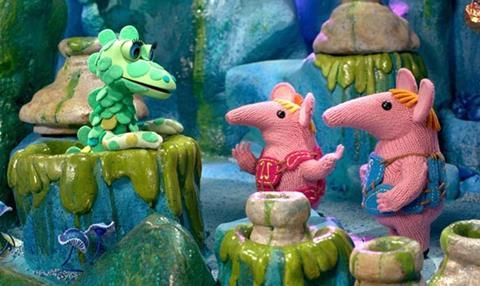 “If you can’t have Oliver Postgate, then who better than World’s Nicest Man Michael Palin to tell you what’s going on, and to interpret their whistled glissandos? I don’t think there’s anything to upset any Clanger aficionados here.”
Sam Wollaston, The Guardian

“It’s every bit as lovely as you would want it to be. For those who grew up with the whistle-voiced, knitted moon-mice this remake is like slipping on an old pair of trainers. As for the new generation – if your kids don’t like it, they have no taste.”
Chris Bennion, The Independent

“The first of CBeebies’ daily revivals revealed that they had lost none of the woolly charm of Peter Firmin’s original creations. It was, in a good way, like peering through a telescope at a programme 40 light years away. Welcome back, Clangers – or woowoodeboo as you might say.”
Andrew Billen, The Times

“New Clangers is essentially a direct remake with the same characters but much better animation. Yet what it now lacks is that slightly sad pungency. It’s another example of how children’s TV has become sanitised, just like so much else in children’s lives.”
Benji Wilson, The Telegraph

“Clangers 2.0 looked a little slicker than this critic dimly recalled it but the little woollen Moon-dwellers still make their whistling noises, and Michael Palin’s voiceover suggests that all is right with the universe.”
Matt Baylis, Daily Express

“Wisely, the makers have stuck closely to the Postgate formula and retained as much whimsical silliness as they can. Just as important, the animation is done with real knitted models and not computer graphics. There’s no need to greet this revival with an ‘Oh dear!’ — it’s much more of an ‘Oh, very good!’”
Christopher Stevens, Daily Mail

“There is a less obvious narrative at work in The Met which can be almost as enjoyable to follow as the story of the police at work: the Metropolitan Police want to come out of the series looking better than they went into it. But the producers want to prove that it is more than just a puff piece. At some stage a covenant has been struck but look hard and you can sense both sides pushing their own agenda.”
Benji Wilson, The Telegraph

“The film-makers did not find, or did not choose to show, any carnivalgoer or organiser complaining — not even about the morose Sergeant Rowlands, who moaned from the moment he got there. The film needed a few outside voices.”
Andrew Billen, The Times

How to be Bohemian with Victoria Coren Mitchell, BBC4

“You couldn’t wish for a better combination of subject and presenter than How to Be Bohemian with Victoria Coren Mitchell. She had also gathered about her a superior collection of clever-clogs commentators, many as eccentric in dress as yesteryear’s bohemians and all with something insightful to say.”
Ellen E Jones, The Independent