“The film’s biggest problem was that it didn’t take us anywhere we couldn’t have imagined for ourselves.” 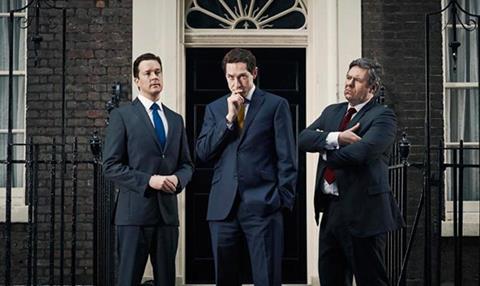 “This was a much less scathing picture of politics than viewers of House of Cards or The Thick of It have grown used to. Writer James Graham’s first instinct is to sympathise, not vilify and so he gave us rounded, flawed human beings instead of the usual scheming Machiavels.”
Ellen E Jones, The Independent

“Unfortunately Coalition was determined to play what were arguably the five most dramatic days of British politics in living memory for as many laughs as possible. But ultimately the film’s biggest problem was that it didn’t take us anywhere we couldn’t have imagined for ourselves.”
Gerard O’Donovan, The Telegraph

“Predictably, since this was Channel 4, the Tories were portrayed as a dyspeptic, grumbling bunch of Victorian aristocrats, knocking back the brandies in a London club. Meanwhile, writer James Graham conveniently forgot to mention the bankrupt state of the Treasury, the national economic crisis or the toxic waste left over from the Blair administration.”
Christopher Stevens, Daily Mail

“It was joy to see Mark Dexter’s Xerox of the Tory leader: he even looked liked Cameron from behind. Grieve was just as good as Brown. What was continually distracting was the miscasting of Bertie Carvel as Clegg. Carvel, angsty, grimacing, care-worn, looked nothing like him and also failed to paint the gloss on him socially.”
Andrew Billen, The Times

“This series may have been Theroux’s finest hour (or two). His gift for perfect neutrality was never more necessarily or carefully deployed, nor his lightning ability to locate the question we all want to ask and frame it in a way that demands the truth without antagonising or browbeating his interviewee. Masterful, and oddly beautiful.”
Lucy Mangan, The Guardian

“There’s not an ounce of superiority or judgement in Theroux’s bearing and you can see his subjects visibly soften as he allows them to believe, as he always does, that they have the upper hand. However, the act is wearing a little thin and his recent subjects have been so weighty that even a man as perceptive as Theroux struggles to scratch the surface of them.”
Chris Bennion, The Independent

“Demelza walked into a family dinner like Beyoncé striding on stage at the VMAs – although her after-dinner singing wasn’t quite up to Beyoncé standard. If you weren’t cheering the new Mrs Poldark on before, you certainly were after this triumph.”
Ellen E Jones, The Independent

“Never has geology seemed so romantic, never have coincidences seemed quite so cheesy and, crucially, never has an audience minded that less. Poldark pushes all the right buttons.”
Matt Baylis, Daily Express