“The benefit of hindsight made this an incredibly powerful programme.” 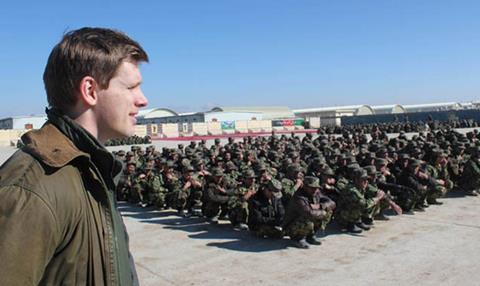 “The benefit of hindsight made this an incredibly powerful programme, a grim reminder of war’s cost from people who, at least in part, paid the price.”
Tim Dowling, The Guardian

“There were affecting contrasts between the enthusiasm of the young marine, smiling with excitement, and the wiser young man who returned.”
Andrew Billen, The Times

“Captain Kerr was charismatic and articulate, able to describe the excitement and terrors of war as he read from his diary, and he paid moving tribute to one of his commandos who was killed on the battlefield. But this material deserved much more respect, not to be treated as leftovers.”
Christopher Stevens, Daily Mail

“It was a surpise to see various people on Football: Hooligans and Proud talking with an aggrieved air of the misconceptions to which their particular brand of criminality falls prey. I listened to so much of this delusional hogwash over a 45-minute period that I almost came close to believing it.”
Matt Baylis, Daily Express

“There’s certainly an interesting film to be made about the alignment of football casuals with hard-right extremists. This, sadly, was very much not it.”
Will Dean, The Independent

“Some episdoes of this show end with the wheels of justice grinding to a truthful but morally unsatisfying halt. This time, Ronnie and his sidekick DS Joe Hawkins pulled an all-nighter, found the crucial evidence and justice was done. Not perhaps the most realistic ending but a high note for a high-class show.”
Matt Baylis, Daily Express

“Repeat to Fade was a fitting title for an episode that repeated so many of the procedural’s tropes over eight series. When it began in 2009 its pace seemed fresh compared with The Bill. I feel it never grew truly comfortable in its own skin.”
Andrew Billen, The Times