“It came across as a promo-reel for a sharper, harsher Minder.” Read on for the verdict on last night’s TV. 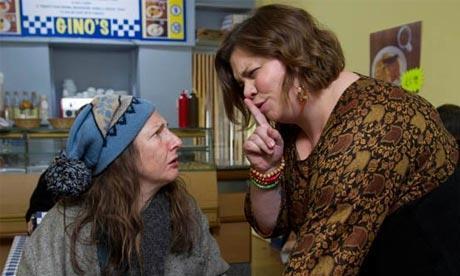 “Taken together, Common Ground, a series of short films all set in the same stretch of south London, might eventually amount to more than the sum of its part… Eleanor, Katy Brand’s tale of a loveless organic café owner whose life takes a turn for the better when her shop goes bust and the premises are taken over by a greasy spoon, felt as if it was always in a rush to get the next plot turn in. Very large narrative details went by in a blur, not satisfying in themselves but leaving just enough of a gloom behind them to dampen the joke that followed… Sunshine Simon was more successful because it worried less about plot than the establishment of character. It came across as an advertisement for a potential series, rather than a self-contained single – a promo-reel for a sharper, harsher Minder – with Tom Davis nicely understated as Simon.”
Tom Sutcliffe, The Independent

“This freak show trivialised an illness suffered by perhaps half a million people in Britain. The disorder covers a spectrum of severity, but to say that someone with OCD ‘loves cleaning’ is like saying that someone with anorexia ‘loves slimming’ or that someone with depression ‘loves a good cry’… Mindless rubbish has its place in the schedules, but I can’t lighten up or chillax in the face of this gruesome farrago. Voluntarily watching Obsessive Compulsive Cleaners is a hate crime if there ever was one, and I wish doing so attracted stern penalties.”
Christopher Howse, The Telegraph

“Jay, as Brain Surgeons called him, was just the surgeon any medical drama would write in: tireless, ruthlessly optimistic, but also cynical and demanding, a man who loved his family but put his patients first because one day his family might be his patients.”
Andrew Billen, The Times

“This was, in the main, a programme about doctors and parents finding reserves of patience, strength, hope and humour in terrible situations. But it also had a lot of brain operations in it. These were incredibly sobering… When Raj emerged from the anaesthetic kicking his legs, I breathed a sigh of relief and decided to stay away from hospitals for a while.”
Sam Wollaston, The Guardian

“If Ricky Gervais’s role in The Office was a masterpiece of the comedy of embarrassment, his title role in Derek is an exercise in sentimental manipulation… Other characters trotted by as one-trick ponies. The care assistant Hannah (Kerry Godliman) is another Dawn from The Office; Kev (David Earl) is addicted to self-deluding sexual boasting. Dougie the handyman (Karl Pilkington with funny hair) is there to give people their comeuppance.”
Christopher Howse, The Telegraph

“Anyone wanting to write about real people – whether they get 12 minutes or longer – would do well to watch People Like Us and pick up some tips about the vitality of ordinary speech. Some of it is flat-out funny… but there are also moments that blend pathos and comedy… You rarely see such austere, self-consciously artificial ways of speaking in dramas about the dispossessed.”
Tom Sutcliffe, The Independent

“Seven episodes into its fourth series, One Born Every Minute remains a reliable emotional rollercoaster. By now the title is almost defiant, daring you to view childbirth as routine. The formula is unchanged: just screams and tears, pain and pushing, an endless production line turning out tiny purple people… There is more drama in half an episode of One Born Every Minute than there is in two series of Call the Effing Midwife.”
Sam Wollaston, The Guardian

“In this series, they’re on a mission to get us doing gourmet grub at budget prices. Many shows promise similar things. Dave and Si’s, I suspect, is actually telling the truth. With their extra-thin pork chop Wiener schnitzels and their cut-price Pollock and barley paellas, they manage to make things that look enticing and are vaguely achievable by people with not much knowhow.”
Matt Baylis, Daily Express

“What was good about the show was how it communicated the experience of having builders in: they were larky, argumentative and sexist. What was bad about it was that it was nothing like having builders in, for this lot finished on time and never once revised their estimate.”
Andrew Billen, The Times

“It’s rare, especially in an American crime drama, so see anyone who isn’t under the age of 40 and surgically enhanced. NCIS goes delightfully in the opposite direction, employing an elderly pathologist (played by Man From U.N.C.L.E. heart-throb David McCallum) and regularly drafting in assorted retired parents and grandparents of the principal players. It reminds us all that these investigators have private lives and that older characters enrich and enliven every story. In a world obsessed by youth and strength, praise be for a show that values grey hairs.”
Matt Baylis, Daily Express