“The tonal flips between frank and filthy, sad and weird give Crashing enough of an edge to make it feel fresh.” 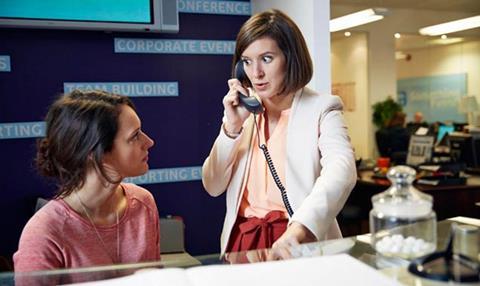 “Crashing shows an insight into the nightmare of starting out in the Big City, reminding us that hope and delusion are close bedfellows. You almost want to reach into the screen, grab some of them and yell: ‘Don’t you realise…?’ It’s a measure of how well-drawn the characters are, how likeably they’re acted and how much the writer understands the genre.”
Matt Baylis, Daily Express

“It’s the tonal flips between frank and filthy, sad and weird that give Crashing enough of an edge to make it feel fresh; that and lines such as: ‘I think my tampon just came out a bit.’”
Richard Vine, The Guardian

“It’s bizarre that writer and star Phoebe Waller-Bridge almost completely ignores the setting and concentrates on the foul-mouthed, one-dimensional characters, who haven’t a fraction of the comic potential. Take away the innovative hospital backdrop and this is a traditional two-girls-and-a-boy sitcom — about as original as Man About The House in the Seventies.”
Christopher Stevens, Daily Mail

“The outstanding moments of the sketch comedy feel like instant classics. However, there were dips in energy and imagination. It’s still great to have Ullman back, and in terms of mainstream laughs that are topical and impeccably performed there’s little to rival what she’s doing. It’s just a few pieces of quality control away from really special.”
Alex Hardy, The Times

“Ullman is at her best in the lighter celeb sketches, but on much sketchier ground in scenes such as the Midlands couple who arrive home from holiday, discover an illegal immigrant clinging on under their motorhome and take him in to teach him about life in Britain.”
Richard Vine, The Guardian

“Last night’s second episode will have left those returning satisfied, being as full of vim and as endearingly eager to please as the first. Ullman’s Duchess of Cornwall was a thing of wonder, bolstering the welcome returns of Judi Dench, Maggie Smith and Angela Merkel. Ullman has clearly put the hours in here, and it shows.”
Gabriel Tate, The Telegraph

“Professor Richard Fortey is of the old school; knowledgeable, passionate. His voice lacks Sir David Attenborough’s gravelly expressiveness, but he’s a thorough and clear guide with a naughty streak.”
Sally Newall, The Independent

“Professor Fortey showed himself to be a highly evolved species of documentary maker, the Lesser-Gimmicked Fortey, you might say, as he wandered this ‘natural laboratory’ joyfully uncovering gems and clearly communicating their worth. The creatures Fortey examined, and the mature messages he drew from them, were such a pleasure that it was easy to forgive him the odd cliché in his voiceover.”
Alex Hardy, The Times

“The beauty of Professor Fortey’s programme was how it showed evolution as something ongoing, not confined to the museum cases. All too often, science programmes present us humans as separate from it all, as if we stepped out of nature once we learnt how to walk upright or make TV programmes. Last night’s reminded us how bound up we all are in its processes.”
Matt Baylis, Daily Express