TV Critics: Dancing Cheek to Cheek; Gotham; How the Rich Get Richer

“It was less serious history, more ‘Carry On up the Regency balls.” 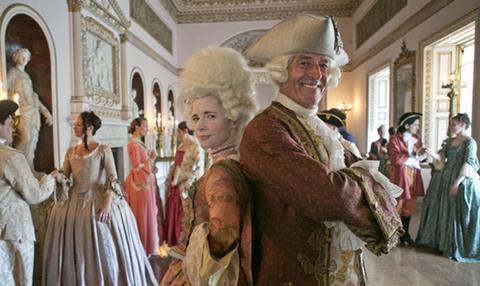 Dancing Cheek to Cheek: An Intimate History of Dance, BBC4

“Len Goodman and Lucy Worsley are already well-loved presenters, but there was something additionally charming about their willingness to look a little silly in the name of our edutainment.”
Ellen E Jones, The Independent

“It was less serious history, more ‘Carry On up the Regency balls’, although there were plenty of passionate dance historians in the wings looking on disapprovingly as little and large hammed it up.”
Bernadette McNulty, The Telegraph

“The show was a little padded with personal challenge as the pair worked towards the final set-piece of performing the minuet as if at an 18th-century ball. Yet along with the fun and fluff were some very clued-up experts, some beautifully illustrated historical books and social insights that travel across time.”
Alex Hardy, The Times

“Instead of launching straight onto the dancefloor, the programme was packed with a bog-standard history filler. Len and Lucy were itching to get on with the larks, but it felt as though someone behind the scenes thought all that frothy dancing stuff was too trivial for a BBC4 documentary.”
Christopher Stevens, Daily Mail

“As enjoyable as the history was, it was the peculiar, unlikely chemistry between the rather gawky Lucy and the fruity Len that appealed. Both were high-stepping it out of their comfort zones.”
Matt Baylis, Daily Express

“I have prayed on my knees for hours to God to save us from the sight of any more non-dancers forced to try to learn in order to get their programmes commissioned but he has not yet heard me and so Lucy had to get to grips with the minuet. Disaster in 3/4 time. But they both stepped nimbly through the history bits.”
Lucy Mangan, The Guardian

“Even those who rarely risk a detour into the dimly lit alley that is Channel 5 must make an exception for Gotham. It might not be surrounded by the fanfare of the latest Sky Atlantic or Channel 4 import, but don’t underestimate this well-written series.”
Ellen E Jones, The Independent

“As ever with Gotham, a theoretically hackneyed premise benefited from lusty execution. The killer, styled ‘The Goat’, was an entirely preposterous mash-up of socialist firebrand and the villain from The Texas Chainsaw Massacre – and yet the action was so relentless you were swept along anyway. Gotham remains junk food TV at its finest.”
Ed Power, Daily Telegraph

Dispatches: How the Rich Get Richer, Channel 4

“Fraser Nelson’s political conservatism lent weight to the argument that something had gone seriously wrong in the distribution of wealth over the last six years. Although it took a while to get going, when the programme began to coolly deliver the facts, they rang out like bullets from an assassin.”
Bernadette McNulty, The Telegraph

“Many shows with provocative titles like this don’t live up to their promise, but Spectator editor Fraser Nelson told us precisely the trick of getting richer. For anyone who cares about Britain, this should be required viewing.”
Christopher Stevens, Daily Mail