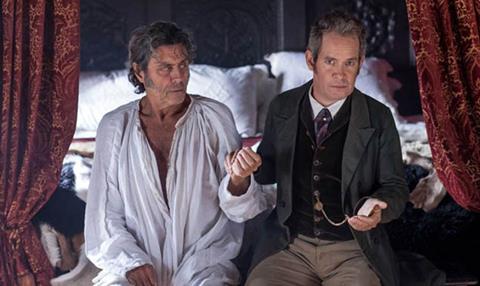 “Though early for comparison, Doctor Thorne feels akin to the best TV adaptations of Trollope. And those ball gowns alone are more than capacious enough to fill the Downton-shaped hole in our Sunday night viewing.”
Ceri Radford, The Telegraph

“It may respect Trollope too much, but this production hasn’t stinted on cast, clothes or backdrop. It’s a real spectacular.“
Christopher Stevens, Daily Mail

“Downton never did it for me – the characters were dislikeable and two-dimensional – but Doctor Thorne shows much more promise. While characters such as Lady Arabella are, of course, dislikeable, they are also believable and well-developed.”
Amy Burns, The Independent

“More Sunday-night girls in nice frocks worrying about who they will marry and who belongs to which class, while their parents in their drawing rooms worry about what’s going to happen to the bloody estate … zzzz. It gets better, though. By the end of the opener, I’m having a lot of fun.”
Sam Wollaston, The Guardian

“The snobbery, the greed, the secrets withheld and fortunes randomly bestowed were familiar clay in Fellowes’s hands. Yet there was something uncomfortable about almost all of it, like discovering a favourite uncle sporting a top hat. Everyone was doing perfectly well what one felt they had done better before.”
Andrew Billen, The Times

“As sharp as the dialogue is the central performance by Jodie Comer. A found child who has grown to maturity with a pervert in loco parentis — that feels new and dangerous.”
Andrew Billen, The Times

“Thirteen takes a great idea and wastes it with a criminal lack of imagination. Every character was hesitant, and every line sounded like guesswork.”
Christopher Stevens, Daily Mail

“The film-quality production and ever-impressive accents, coupled with the stellar cast and host of new faces made for an excellent start to the new series. The only problem House of Cards faces this season is being utterly upstaged by the real-world US political drama currently being played out on the international stage.”
Amy Burns, The Independent

“This was sleek, breakneck hokum. As ever, Spacey and Wright were delightfully diabolical, bringing just the right mix of pantomime zeal and actorly chops to these larger-than-life antiheroes.”
Gerard O’Donovan, The Telegraph