“It fizzes along, sparkling with life, warmth and wit.” Read on for the verdict on the weekend’s TV. 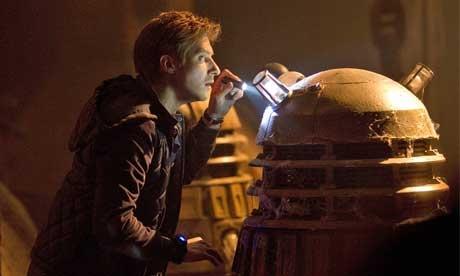 “It was clever and silly and entertaining as usual. And its probably quite smart to get us all used to the idea of Clara, a tech genius who likes listening to Carmen and baking soufflés.”
Ben Machell, The Times

“This is a lovely episode, overflowing with Moffatism and, well, Doctor Who-ness. It fizzes along, sparkling with life, warmth and wit.”
Sam Wollaston, The Guardian

“I can never follow the Whovian cosmology from one scene to the next, but I’m guessing the fact that Oswin seemed to have become a Dalek at one point in this story won’t prevent a reappearance later in the series.”
Tom Sutcliffe, The Independent

“I can’t watch someone clowning about in a state of the art killing machine without thinking of Syria and Afghanistan and all the other places where mechanised slaughter is taking place for real.”
Matt Baylis, The Express

“He whoops and says it’s awesome, unlike anything else he’s even been in. And at the end of three days, the dudes with offensive haircuts declare what many of us have long suspected: that Richard Hammond is a total tanker. Seriously, that’s what they call people who operate tanks: tankers.”
Sam Wollaston, The Guardian

Toughest Place to be… A Nurse, BBC1

“Connolly took it all in with a permanent expression of quiet bafflement, rarely letting her own emotions swamp the story. She seemed to be aware that a city with a runaway murder rate was more important that her own reactions to it.”
Matt Baylis, The Express

Who on Earth Was Ford Madox Ford?, A Culture Show Special, BBC2

“Alan Yentob’s film had enough affection in it to make you understand why so many of Ford’s contemporaries succumbed to him. It perhaps wasn’t wise, though, to end with quite so solipsistic a summary of his subject’s stature: “If he was still around,” Yentob concluded, “I can’t imagine many people I’d rather have lunch with.”
Tom Sutcliffe, The Independent