TV Critics: Downton Abbey; By Any Means; When Miranda Met Bruce; The Making of Merkel

“It felt as if its creator Julian Fellowes might have written it while doing something else, like erecting some bookshelves.” Read on for the verdict on last night’s TV. 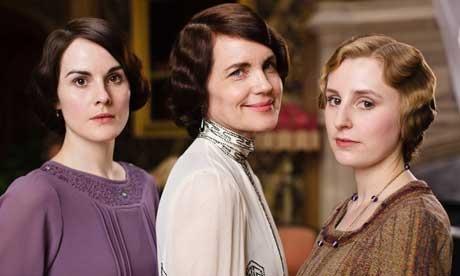 “In its fourth season Downton Abbey does look in need of a few minor restorations… Julian Fellowes’s dialogue is also suffering the rot… Yet who would not call Downton’s return fun? It looks lovely, the plotting is easy on the brain and the character acting splendidly old school.”
Andrew Billen, The Times

“It’s not the most auspicious of openers to the new season of the posh soap. There’s a dustiness and a mustiness about the place, a sense of same-old, same-old. Downton Drabbey. Even Dame Maggie’s withering one-liners aren’t as sharp as they once were.”
Sam Wollaston, The Guardian

“Downton is a well-performed, beautifully scripted insight into another England. There are fascinating, subtle insights into the impact of class on human relationships. This has the making of a classic that will last for a long time to come.”

“It felt as if its creator Julian Fellowes might have written it while doing something else, like erecting some bookshelves.”
Matt Baylis, Daily Express

By Any Means, BBC1

“If you wanted to feel really angry at how the BBC spends our money, you could have watched By Any Means, a revoltingly poor action drama about a covert police unit that operates beyond the law. Its presence and unspeakable badness make you suspect that some writers merely have to shove a shopping list in the direction of the BBC to get a commission.”
Matt Baylis, Daily Express

“By Any Means is the brainchild of Tony Jordan, and shares much of the DNA of his inexhaustible hit Hustle. There is trickery and quippery from photogenic leads, cartoon hoodlums are duly bested, and it’s all shot in swish kinetic fast-forward… Along the way there was an awful lot of self-satisfied yak from the leads, who need to watch it or they could easily annoy the crap out of whoever’s not watching Downton.”
Jasper Rees, The Telegraph

“It looked promising, if derivative, enough – some Mad Men-style silhouetted credits, lots of Guy Ritchie zooming and jump-cuts, a classy cast – but it added up to lowest common denominator drama.”
Alice Jones, The Independent

“It was not clear whether this was the BBC gently showing Brucie the door, the beginning of a long, fond farewell, or a pilot for Miranda as chat-show hostess… If she was allowed to ditch the hagiographic scripts and the messing about, Miranda might make a rather good chat-show hostess – not as rude as Mrs Merton, not as fawning as McCall. I’d watch her.”
Alice Jones, The Independent

The Making of Merkel with Andrew Marr, BBC2

“An appealing composite portrait emerged via those who have known Merkel… If there was something missing here, it was testimony from anyone who can’t stick the woman. Greek or otherwise.”
Jasper Rees, The Telegraph