“An episode that had all the finesse of a pig in a tutu.” 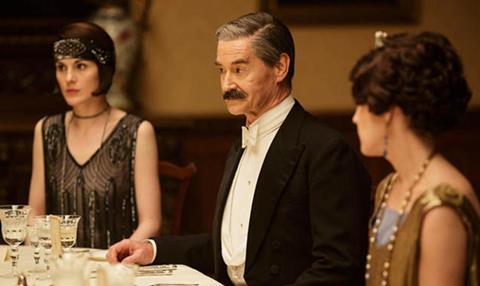 “An episode that had all the finesse of a pig in a tutu. But the pig-play was subtlety itself, compared to the moment Lord Grantham’s grumbling ulcer burst — literally over dinner. It was as if Julian Fellowes had handed the scene to ultra-violent film director Quentin Tarantino, and we were watching a gentry-exploitation movie called Reservoir Lords, or Posh Fiction.”
Christopher Stevens, Daily Mail

“There’s nothing new or interesting going on this weekend, and then BLOODY HELL, literally, at the dinner table, with the future PM present. Scene guest-directed by Quentin Tarantino, perhaps? It’s certainly livened things up a bit; good show.”
Sam Wollaston, The Guardian

“Julian Fellowes turned a dinner party in Downton Abbey into an allegory of Munich 1938. Lord Grantham’s burst ulcer, its sanguinary content vomited spectacularly over the dining-room table, is, of course, the Second World War. As a prefiguration of catastrophe (ratings in this case for ITV when Downton closes shop) it was terrific stuff, however; daft but disturbing.”
Andrew Billen, The Times

“The episode belted along, confirming that Homeland is back at its best.”
Christopher Stevens, Daily Mail

“Homeland did not disappoint. With much of the action taking place at a refugee camp in Lebanon, the writers couldn’t have hoped for a more topical time at which to broadcast this episode.”
Amy Burns, The Independent

“The premise sucks. But surprisingly, the show didn’t. From blazing sunshine to electric storms and full-on downpours, Cuba had it all.”
Amy Burns, The Independent

“This was a treat of a programme, full of detail but rather like the emperors’ lavish burials, more of a spectacle than a secret or a story.”
Matt Baylis, Daily Express