“This series has reached new heights of melodrama, absurdity of storyline and cliched writing.” Read on for the verdict on last night’s TV. 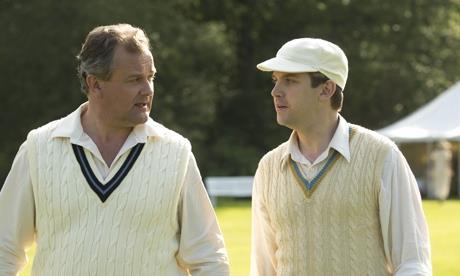 “This series has reached new heights of melodrama, absurdity of storyline and cliched writing. And at times – say some people who know more about these things than I do – just plain wrongness… Downton is still undeniably fun, just so long as you realise that’s all it is – fun – and nothing more.”
Sam Wollaston, The Guardian

“All was well in the end, I’m glad to say, not something we can any longer take for granted after Sybil’s brutal sacrifice to the gods of narrative surprise earlier in the season. Even as Robert crouched behind the wicket in the closing minute of the drama, you wondered whether a bad bounce might send us spinning into Season Four with a skull fracture and coma. But in the event there was no cliff-hanging event, Julian Fellowes choosing instead to stitch up all kinds of fluttering loose ends.”
Tom Sutcliffe, The Independent

“As soon as we learnt that there was a House v village cricket match to prepare for, we had the perfect ticking timebomb. Yes, there were themes of grief, and progress, and prejudice thundering here. But that couldn’t possible get in the way of everybody boshing down to the pavilion for a cucumber saahhndwich and a group hug, could it?”
Alex Hardy, The Times

Obama: What Happened to Hope, BBC2

“Marr’s film wasn’t quite a political obituary for its subject but it made no assumptions about his survival either, and spread the blame for the disillusion felt by many voters between Obama’s inexperience and introversion (he’s better at thinking than schmoozing) and a combination of Republican malice and historical bad luck.”
Tom Sutcliffe, The Independent

“This documentary, rammed with recollections from friends, family and collaborators, was a just and fitting tribute. I did wonder, however, when anyone was going to say anything less than 100 per cent praiseworthy about the bloke.”
Matt Baylis, Daily Express

“This was presented by Guy Martin, who I suspect is the sort of twinkly-eyed, heavily sideburned soul ladies adore, until he opens his mouth. When he does, what comes out is an almost impenetrable monologue, or perhaps that should be dialogue, since Martin is permanently engaged in the business of chuntering, in Lincolnshire dialect, with separate parts of himself.”
Matt Baylis, Daily Express