TV Critics: Downton Abbey; The Thick of It; Moone Boy

“You never really get the sense that it’s going anywhere.” Read on for the verdict on the weekend’s TV. 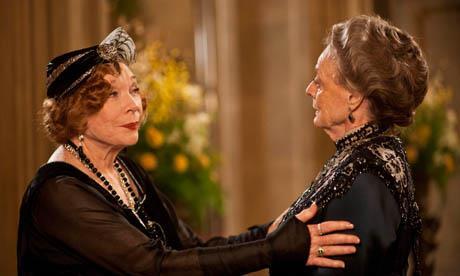 “It’s seductive, because it’s so well done, but you never really get the sense that it’s going anywhere, or telling you anything.”
Sam Wollaston, The Guardian

“It felt like, having built an imposing house of cards, scriptwriter Julian Fellowes could not be bothered to blow it all down. Instead he just let little bits flutter off in a most unsatisfying manner.”
Matt Baylis, Daily Express

The Thick of It, BBC2

“The Thick of It isn’t sweet or lovable and hasn’t a fraction of Moone Boy’s essential good-heartedness. I don’t think it’s forgiving or tender to any of its characters. But it doesn’t need to be because it offers an unceasing stream of savagely funny lines.”
Tom Sutcliffe, The Independent

“Funny, hilarious even, but at the same time hard to enjoy… I worry that The Thick of It isn’t satire at all but a straightforward reportage of the way we are ruled.”
Matt Baylis, Daily Express

“Moone Boy is entirely lovable, one of those comedies that you actually feel a slightly better person for liking.”
Tom Sutcliffe, The Independent

“Moone Boy is not a masterpiece, rather a delightful miniature.”
Andrew Billen, The Times

“The more Tess Daly told us it was Strictly’s best line-up yet, the more I missed Nancy, Edwina, Rory and Lulu.”
Andrew Billen, The Times