“A piece of sugar-coated, but ultimately enjoyable, TV.” Read on for the verdict on last nights TV. 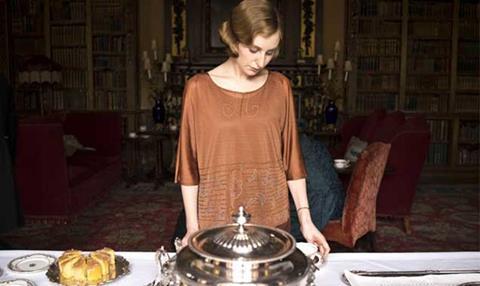 “Downton has always operated with a large ensemble cast and multiple plot strands which makes it hard to achieve a satisfactory finale. So all praise to Julian Fellowes for writing something that not only wove together the loose ends but also created a piece of sugar-coated, but ultimately enjoyable, TV.”
Ben Lawrence, The Telegraph

“It’s been a miserable season. Matthew’s exit, for Dan Stevens to go and pursue other projects, was like the engine of a big ship shutting down. Since when it has slowly lost way, and steerage, until it drifted, rudderless and pointlessly in the doldrums of period mediocrity.”
Sam Wollaston, The Guardian

“The 90 minutes did at least yield an insight into Fellowes’s theory of plotting. Maggie Smith was given the line that life was a series of problems we must try to solve until we die. It surely is in Downton abbey. Little tangles of plot are, after a week or so, straightened with a sudden tug. Larger ones – such as Anna’s rape – end, equally abruptly, in death.”
Andrew Billen, The Times

“Rare is the programme that can bring mums, dads and children together and that the grown-ups will genuinely find as hilarious as their offspring do… The Horrible Histories team have added another to the cannon, this fantasy comedy set in  the puppet-populated world of Yonderland.”
Ellen E Jones, The Independent

“Fantasy spoofs are as old as The Princess Bride and Labyrinth. Sky has form for them with its Terry Pratchett movies. Yonderland, to echo Lady Mary on Downton, is more beguiling than irritating, and pretty funny too.”
Andrew Billen, The Times

The Revolution Will Be Televised, BBC3

“The joy of TRWBT is its utter chutzpah. Jolyon and Heydon don’t have the comedy performing talents of, say, Sacha Baron Cohen. But they make up for it with the hugeness of their bollocks… It’s outrageous and audacious to the point that it’s sometimes painful to watch. Hilarious, though.”
Sam Wollaston, The Guardian

“Is this the worst piece of television ever made?… The show was so lacking in imagination, so lazily planned and tediously executed that only an alien abduction to erase my memory would have been a satisfactory conclusion.”
Rupert Hawksley, The Telegraph