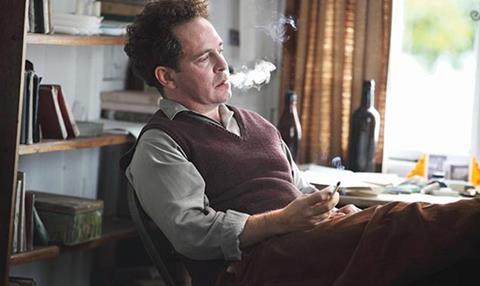 “This was Tom Hollander’s 80 minutes. Brylcreme-ruffled, double-chinned and mottled by booze, his Dylan Thomas was yet capable. You did not understand what, beyond physiology, had wrecked him, but Hollander made you sick at the tragedy of it.”
Andrew Billen, The Times

“Maybe you were moved to tears by the throbbing vibrato as Hollander did Thomas doing the narrator of Under Milk Wood. I felt like Oscar Wilde reading Little Nell’s death. Giggly with impiety.”
Stuart Jeffries, The Guardian

“Rather like the poet’s verses, this was a superficially dazzling affair. Tom Hollander captured perfectly the desperation of the poet’s swanswang, filled with wind, fire, vomit and whisky.”
Matt Bayliss, Daily Express

“Tom Hollander, last seen as a vicar having a nervous breakdown in Rev, played Thomas with such pitiful seediness that you could almost smell the stale booze. His voice lacked the sonorous grandeur heard on recordings of the poet himself, but he embodied the shabby charisma of a drunken genius.”
Christopher Stevens, Daily Mail

“This wasn’t the most compelling of episodes, but given that Kurt seems to be losing his memory and that mental acuity is existentially essential for the detective who can’t do anything right except solve crimes, the drama’s going to get more satisfyingly dismal before we’re done with him.”
Stuart Jeffries, The Guardian

“It was a case on a different scale from the usual Ystad-based murders and robberies and therefore a thrilling way to welcome back our favourite subtitled Swede, yet this plot wasn’t the grave matter that most fans will have zeroed in on. It was the few, fleeting scenes that hinted that Wallander’s mind might not be as sharp as it once was.”
Ellen E Jones, The Independent

“There’s only so much upbeat pre-World Cup twerking, gunplay, civic braggadocio and compulsory carnival a tight-ass gringo can take.”
Stuart Jeffries, The Guardian

“The flavelas were the spiritual heart of the film and, we were left to infer, of the city. Its music, samba, aspired to fuse racial and class difference through dance, but it had failed. A dangerous place and brave, then, of Alan Yentob, the programme’s presenter, to make it all the way (apparently) there just for the sake of a 30-second cameo at the film’s start”
Andrew Billen, The Times