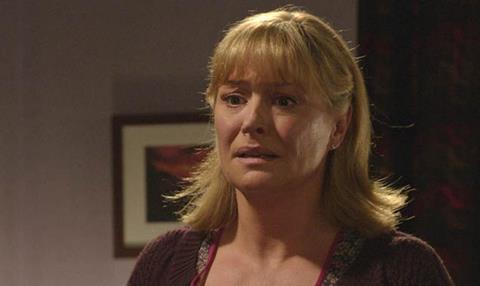 “This was the marquee event of a masterfully managed anniversary week. Moody trailers, countdown clocks and clever social media campaigns built anticipation. Scripts kept us guessing by putting multiple suspects in the frame, like a life-sized game of Cockney Cluedo. Live scenes added a frisson of excitement and the production was admirably ambitious, transcending soap convention.”
Michael Hogan, The Telegraph

“As the sounds of Ronnie and Roxy reliving the Ibiza years rang out across the Square, Jane was the one who found little Bobby standing over Lucy’s body. Did the pre-teen assassin really do it? Is Dean really dead? Will Kathy really come back for good? Why can’t Rainie be in it all the time and form a filthy alliance with Richard Blackwood, who’s so badass he gave Ronnie a gun? So. Many. Questions. Bring on Friday’s all-live climax.”
Hannah Verdier, The Guardian

“The scriptwriters of EastEnders must have cudgelled their brains to come up with that ending, because a denouement so unsatisfying is a rare thing. In the language of Twitter, it was an ‘epic fail’.”
Christopher Stevens, Daily Mail

“Nicholas Witchell and long-time BBC royal correspondent Jennie Bond were on gossipy form. More of a coup was the presence of Sandy Henney, press secretary to Prince Charles from 1993 to 2000. All were united in their grudging admiration for the real dark prince of press manipulation, Mark Bolland. Still, no one has yet asked the most pressing question of all: who gives a toss about the royal family? Aside from the royal correspondents, that is.”
Ellen E Jones, The Independent

“On the dubious principle that the monarchy ‘relies on publicity… for the oxygen of survival’, Steve Hewlett’s film put the focus on the public-relations people. I cheered Sarah Sands when she chatted to the camera, because I know and like her, and booed when Piers Morgan came on, because I’ve never met him and don’t much want to.”
Christopher Howse, The Telegraph

“Reinventing the Royals was almost worryingly indiscreet. It added up to a very good stab at modern-day court history; Wolf Hall with PRs, not priests.”
Andrew Billen, The Times

“The story was told by a young art historian, Janina Ramirez, whose sartorial tastes leant heavily towards the goth. You felt her emotional temperature rise when she got close to the artefacts and manuscripts, but she embellished what might have been dull passages about arcane ecclesiastical compromise with wonderful anecdotal garnets.”
Andrew Billen, The Times

“Someone should tell Dr Ramirez that ‘hermetic’ is not the adjective for being a hermit. But she is to be congratulated for enthusing us viewers with a vanished world that seems more accomplished in many ways than our own today.”
Christopher Howse, The Telegraph