“The film was even-handed if not especially illuminating.” 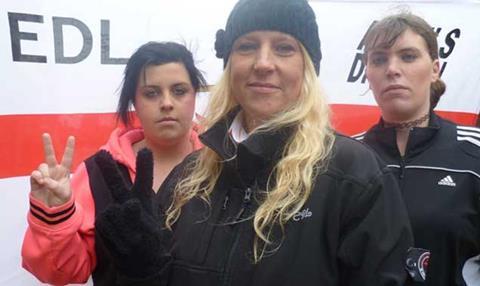 “EDL Girls: Don’t Call Me Racist was based on the tenuous premise that the English Defence League is overwhelmingly a male outfit and so it’s good to hear the stories of its women supporters. It served, rather, to ridicule the often vulnerable and ill-educated women it depicted.”
Stuart Jeffries, The Guardian

“One of the newest recruits was 18-year-old Amanda who had just moved to the area and was hoping to make new friends. I found her strangely reminiscent of Faisal, the inept British jihadist who accidentally blows himself up in Four Lions.”
Ellen E Jones, The Independent

“As an observational documentary, the film was even-handed if not especially illuminating. At its most unsettling, it revealed an organisation that thrives on ignorance, grievance, prejudice and the threat of violence. At its most reassuring, though, it showed that education and intelligence are often the best weapons against intolerance.”
Gerard O’Donovan, Daily Telegraph

“Timothy West and Prunella Scales were delightful companions — funny, charming, knowledgable and loveable. The spectacular scenery and gentle pace of canal life, with restaurants and pubs dotted along the way, and cheery ‘gongoozlers’ or onlookers willing to share their picnics at every lock, gave their adventure an idyllic appeal.”
Christopher Stevens, Daily Mail

“Two darling elderly thesps, she 81 and he 79, drifting in their sun-dappled dotage through places with names such as Limpley Stoke, and savouring the views from 200-year-old aqueducts. An anti-Top Gear pleasingly devoid of adrenaline, testosterone and oafs in tragically tight jeans. This was perhaps TV’s loveliest hour for a while.”
Stuart Jeffries, The Guardian

“This engaging, light-filled travelogue proved more a hymn to the possibilities of later life than its trials, and at least as much a tribute to the joys of a happy marriage as to the recreational pleasures of canals.”
Gerard O’Donovan, The Telegraph

“Photographer Harry Hook got breathtaking access to piercingly unusual events, such as a coming-of-age ceremony so intense its participants can go into seizures. As unfamiliar as this terrain was, it was gratifying to see that some things are universal. No one, it seemes, is immune to having their Eighties self mocked relentlessly.”
Alex Hardy, The Times

“Hook’s gentle, humorous manner got the best out of every encounter, a reminder good photographers know about more than lenses and shutter speeds.”
Matt Baylis Daily Express