“No amount of Scandi-cool direction from Kristoffer Nyholm could make this draggy script zip along.” 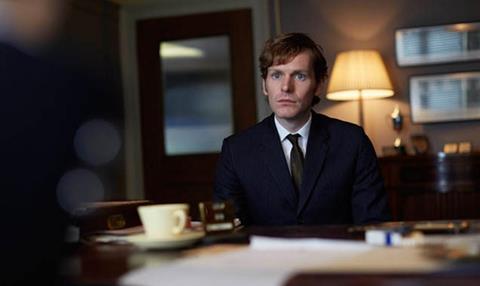 “If you thought John Thaw’s Morse was improbably clever, his younger self in this Sixties-set prequel really does test credulity – and not just the viewer’s. For viewers familiar with the middle-aged grump Morse will become, it’s almost like watching a modern policeman on loan to a 1960s police force.”
Ellen E Jones, The Independent

“No amount of Scandi-cool direction from Kristoffer Nyholm (The Killing) could make this draggy script zip along. The twin themes of feminism and Freemasonry were manoeuvred into position with such laborious care that the eye soon strayed to the reliable Morse-porn of the backdrops and the ear to the anachronistic oddities in the script.”
Tim Martin, The Telegraph

“You know you’re watching educated telly when you need a dictionary to decipher what the characters are talking about. Inspector Morse, with his crosswords and his penchant for the arts, always was something of a linguistic show-off — but full marks last night if you knew what a ‘salmagundi’ was without looking it up.”
Christopher Stevens, Daily Mail

“On a spectrum of grit – from Midsomer to Line of Duty, it lies somewhere in the middle. It is, nevertheless, very charming, in an understated-English kind of way.”
Sam Wollaston, The Guardian

“There was, certainly, nothing wrong with Russell Lewis’s story last night. So why was it such a chore to watch? The sad fact is that Shaun Evans is never right in this role. We are six episodes in now, and he has still to make the young Morse anything more than gauche.”
Andrew Billen, The Times

“For fans of the earlier (or should I say later?) Morse there’s a great satisfaction in watching as the roots of John Thaw’s lonely, boozing puzzle-cracker are laid down in the younger version. What satisfied less, though, was the identity swap ending, which felt like the only explanation the writer could arrive at after having plotted himself into a very tight corner.”
Matt Baylis, Daily Express

“Those who saw the programme title in their TV guide and hoped for a detailed discussion of Byker Grove and Irn-Bru consumption (just me?) were disappointed, but presenter Rory Stewart did have an intriguing theory to propose. The academic, author and Tory MP believes that the line dividing Scotland and England is but ‘a pernicious scar first inflicted by the Romans 2000 years ago’. He made a compelling case.”
Ellen E Jones, The Independent

“It was an intruiging argument, bulked up with lots of evidence from Afghanistan and ancient Rome, reminding us that in some vital ways the world never really changes.”
Matt Baylis, Daily Express

“A professional journalist can be relied upon to get the story he wanted. An inspired one comes back with something better that confounds it. Last night Louis Theroux was inspired.”
Andrew Billen, The Times