“Why can’t children’s TV be this good all year round?” 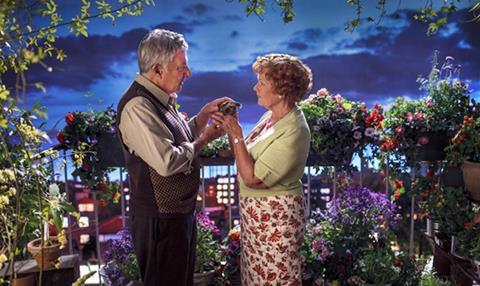 “An utterly, completely, inescapably beguiling adaptation…Everything about the film is beautiful. Every line shines, every moment is polished, the slight plot unfolds smoothly and sweetly – everything is done to a turn.

[James] Corden is warm and uncynical without becoming dull or twee. [Judy] Dench is on almost literally sparkling form – the story lives or dies by her ability to twinkle as mesmerisingly for us as the book’s Mrs Silver does for Hoppy – and [Dustin] Hoffman is … well, just perfect.”
Lucy Mangan, The Guardian

“Part of the pleasure in watching television with children is their attention to detail and this rendition of Dahl’s madcap fable didn’t disappoint…Why can’t children’s TV be this good all year round?”
Matt Baylis, Daily Express

Behind the Scenes: Esio Trott

“The feel of the piece was undeniably inviting, with neat and warm direction by Dearbhla Walsh… That Hoffman and Dench are masters of their craft is in no doubt. However, I didn’t always enjoy their characters, or the pace at which they unfurled. I couldn’t quite cope with seeing Hoffman this emasculated…Especially, I found the deliberate kookiness of Mrs Silver rather grating.

However [James Corden] featured in some beautifully choreographed sequences and, most importantly, brought some energy to a story that was sometimes as slow as a sloth.”
Alex Hardy, The Times

“The story wasn’t a patch on [Roald] Dahl’s best-loved tales, with their giant peaches and fantastic foxes. But the megastar cast and an ingenious rewrite made it work.”
Christopher Stevens, Daily Mail

“It’s hard to think of a more formulaic sitcom in all TV history. The same scenes are repeated in every episode, and the same characters turn up in the same order. But the sheer vigour of the humour delivers the laughs.”
Christopher Stevens, Daily Mail

“I can’t deny that the script is packed with jokes — yes, some terrible, but some that land well and are precision-delivered — but goodness, what an awful panto it can also be.”
Alex Hardy, The Times