“Statistically meaningless, unamusingly performed and condescendingly packaged.” Read on for the verdict on last night’s TV. 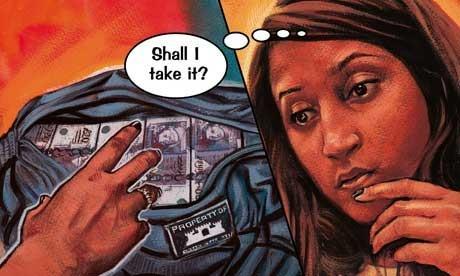 “It’s not science, nothing is proved by a small number of random stunts. You can’t say afterwards that London is lighter-fingered than Brighton or less racist than Manchester (though it probably is). But, anecdotally, it’s interesting; these are the reactions of real people and they shouldn’t be entirely ignored.”
Sam Wollaston, The Guardian

“The programme presented its findings as heartening proof that we’re decent at heart, but this seemed a rather wishful interpretation of the results… What it did prove – in the different responses of London and Manchester diners to the racism – was that it only takes one bold soul to crystallise a suspended decency in others.”
Tom Sutcliffe, The Independent

“It’s funny, I’ll give it that, seeing people earnestly debating with themselves and their partners about the why and wherefores of legging it with the 30 grand they think they’ve found in a phone box… It’s sometimes deeply satisfying, too, to see a thief scarpering with a bike only to be hauled to the floor by a hidden steel cable. I’m just not convinced it tells us anything and may tell us dangerous untruths.”
Matt Baylis, Daily Express

Who Were the Greeks?, BBC2

“One of those documentaries that flatters to deceive: it sounded serious and promised to inform and educate, and thanks to the telegenic smoothness of its presenter, Dr Michael Scott, it even left the impression it had done just that. Until the credits had rolled, when you were left to wonder: what exactly do I know about the Greeks?”
Terry Ramsey, The Telegraph

“There was many a classical nuggest in Who Were The Greeks? and the general thrust of them all was that the ancient Athenians and their neighbours were far, far weirder than we give them credit for.”
Matt Baylis, Daily Express

“Yesterday’s edition, although not as good as the first, was still enjoyably voyeuristic, funny, embarrassing and occasionally touching. Mike Leigh could not have directed better the half-concealed looks of hope and disappointment, the exploratory foot moves under the table, a back’s sloughed off caress… The only thing wrong with this show is that it needs to air on Saturday nights, where it would provide much consolation, and the odd spark of hope, to the dateless.”
Andrew Billen, The Times

“Anyone who says television doesn’t make inventive programmes any more should watch this. Set in the office of a modern-day female psychiatrist, who is confronted by some of history’s most famous, unusual or bonkers women, it is surreal, but gloriously different… The scripts (by a team of writers) are clever, but the whole thing is held together by Rebecca Front, who plays the psychiatrist with a perfect mixture of assurance and bafflement.”
Terry Ramsey, The Telegraph

“What’s best about Happy Families is that it’s observational method allows you to see that nothing is as simple as its title.”t