“I wanted to meet all of these people.” Read on for the verdict on last night’s TV. 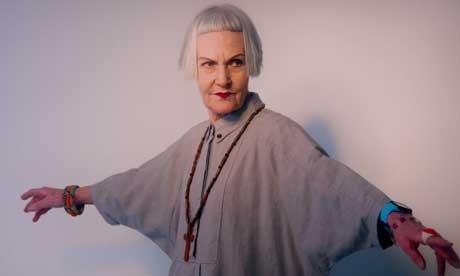 “I wanted to meet all of these people, including the director/producer Sue Bourne. I admired Bourne’s questions, but most of all I admired how Baroness Trumpington was unafraid to, occasionally, tell her that they were nonsense.”
Alex Hardy, The Times

“Bourne lets these remarkable characters lead the narrative. She rejects the notion of eccentricity when it would have been easy to portray them as kooks. The idea that it’s about looking good is a bit of a ruse, really, because it’s about being determined to live as full a life as possible at whatever age. It’s style and substance, and it’s lovely.”
Rebecca Nicholson, The Guardian

“On the surface, this isn’t the sort of show I find it easy to get into… And yet… there’s something about the Bake-Off that’s compelling. It’s partially the competitors themselves – a likeable bunch of teachers, army wives and students with not a prima donna among them – and partially the fear that at any minute everything could all go horribly wrong.”
Sarah Hughes, The Independent

“We’re halfway through this year’s Bake Off. Some bakers have risen to the challenge, while others are stuck near the soggy bottom. Not even a Dalek could save poor Rob this week, as his gluey sci-fi showstopper – and unduly scientific technique in general – saw him sent home after biscuit week.”
Neil Midgeley, The Telegraph

“The sense of companionship that once made New Tricks ideal, if undemanding family viewing has all but vanished, as indeed have most of the original cast… In the US, long-running procedural shows such as CSI and Law & Order are often rejuvenated by the arrival of new casts. In the case of New Tricks, however, I can’t help feeling it would have been better to put this old dog down.”
Sarah Hughes, The Independent

“In neither of these cases did we glimpse a checklist or a mission statement or hear a single bit of civic gobbledegook. All we saw was people with great reserves of compassion doing something quite simple for others far less fortunate and achieving great things. In an era when social workers are so often viewed as incompetent meddlers, it was uplifting to see this very different version of events.”
Matt Baylis, Daily Express