“Chris Taylor’s film was rivetingly revealing. It made the notorious Bullingdon Club seem not that bad by comparison.” 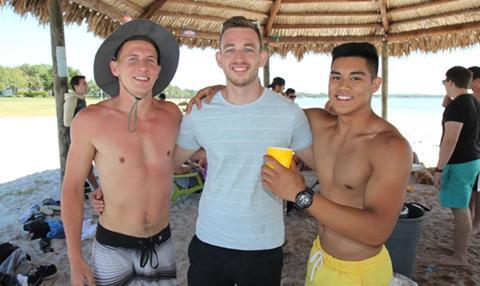 “Chris Taylor’s This World documentary was a decent hatchet job, bringing in well-reported but still upsetting evidence of rape and death by ‘hazing’. It was hampered only by the fact that the Wasp thugs in the oldest of frats, the ones named grandly after letters of the Greek alphabet, were far too canny to let his cameras get too close.”
Andrew Billen, The Times

“Chris Taylor’s film was rivetingly revealing. It made the notorious Bullingdon Club seem not that bad by comparison.”
Claudia Connell, Daily Mail

“Watching Frat Boys: Inside America’s Fraternities, I was tempted to wish that the fraternities, with their Greek names and secret rituals, don’t make it over here. This alarming film from the This World team showed us much to deplore about the inner world of American university men’s clubs.”
Matt Baylis, Daily Express

“BBC2 took us winging across the Atlantic for an engrossing look at that most bizarre American social construct, the university fraternity. While we heard ‘brothers’ jaw on about high ideals and shared noble values, what the footage revealed was standard boy-student scenes of boozing, and endless displays of dullard chest-thumping.“
Gerard O’Donovan, The Telegraph

“Frat Boys: Inside America’s Fraternities was a really interesting documentary. Worth catching up on, if your mind was elsewhere.”
Sam Wollaston, The Guardian

“Even though it was a new, never-before-seen episode it felt very out of date. Contactless payment is hardly a new phenomenon, yet Mary was marvelling over the ability to pay for groceries with your mobile phone as though she’d discovered a time machine. Isn’t she meant to have her finger on the pulse of the retail world?”
Claudia Connell, Daily Mail

“Tipping and testing the latest retail trends, Mary Portas provides a guide for the perplexed. As well as just commenting on and sometimes enthusing about all the changes, Mary thankfully retains her trademark scepticism.”
Matt Baylis, Daily Express

“This was stirring stuff indeed (all praise to producer-director Tom Mustill and photographer George Woodcock). Not just because of the difficulty of capturing and transporting these large-yet-delicate animals but also for such endearingly odd sights as a truckload of giraffes taking a ferry ride across a river.”
Gerard O’Donovan, The Telegraph

“Once more Bettany Hughes, in her Genius of the Modern World series, did an excellent job of not only explaining his views but charting their origins and consequences.”
Andrew Billen, The Times