TV Critics: From There to Here; Horizon; How The Wild West Was Won

“From There to Here is in danger of being neither here nor there.” 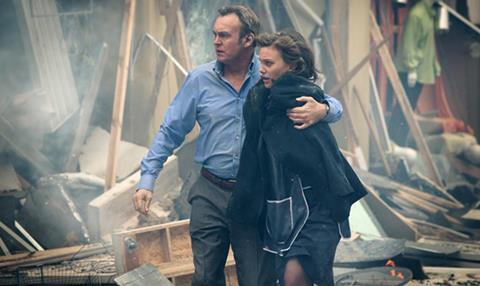 From There to Here, BBC1

“The gangland element made a lumpy mix of political and dynastic drama even less digestible. Nor did I much care for or about the characters. For me, From There to Here is in danger of being neither here nor there.”
Andrew Billen, The Times

“From There to Here is wonderful. Tune in next week if you like rich, confident, subtle, beautifully-written drama in which characters speak and act and crack jokes in bad situations just like real people do.”
Lucy Mangan, The Guardian

“With both Philip Glenister and Liz White playing main parts, in a historical setting of Manchester, From There to Here carries memories of Life on Mars. This opening episode showed it definitely has the potential to be a memorable series about looking for more in life.”
Terry Ramsey, The Telegraph

“Daniel and Joanne’s courtship was touching but there should been a lot more to enjoy in this personalised survey of recent British history… Daniel’s totally implausible transition from law-abiding family man, to criminal numpty can’t be explained away as a midlife crisis.”
Ellen E Jones, The Independent

“Glenister sweated and ground his teeth, and did his best to build the suspense, but this was not edge-of-the-seat telly. All the characters were given to sudden depressive bursts. I had to check the Radio Times to make sure the script wasn’t written by Morrissey.”
Christopher Stevens, Daily Mail

“Beyond the opportunity to watch this boring bloke being blown up twice, once in the original blast, and again in a madcap insurance fraud, it offered precious little pleasure.”
Matt Baylis, Daily Express

“My first thought about Horizon’s £10 Million Challenge was that telly will make a game show out of anything these days. I am now persuaded this was a useful metaphor for the crazy way society determines its priorities.”
Andrew Billen, The Times

“A sextet of presenters delivered succinct and efficient little explanations for the need for a solution to antibiotic resistance, to global warming, dementia, paralysis, clean water scarcity and rising malnutrition. Good luck to everyone.”
Lucy Mangan, The Guardian

How The Wild West Was Won with Ray Mears, BBC4

“Ray Mears has always been at the sensible end of the survivalist spectrum and now that he’s back on the BBC after a brief sojourn at ITV, he’s found a documentary subject that fits as snug as a beaver pelt hat.”
Ellen E Jones, The Independent

“A documentary like this needs quirky facts, and Ray had foraged out plenty.”
Christopher Stevens, Daily Mail

“Sober but entertaining throughout. Mears’ look at the interplay between history and nature painted a startling picture of early pioneers who crossed the continents on foot and in their wagon trains.”
Matt Baylis, Daily Express