“A so-so start to a season billed to be the best of them yet.” 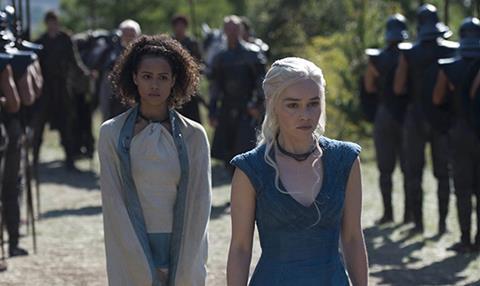 “It was fine as season premieres go but those expecting a repeat of the Red Wedding or the Battle of the Blackwater would have been left disappointed. While there was plenty going on none of it was terribly exciting. All in all, ‘Two Swords’ was a so-so start to a season billed to be the best of them yet.”
Neela Debnath, The Independent

“As usual the sheer ambition of this drama that gives you everything from dragons and deadly zombie-like creatures to high level politicking and, with this opener, a lesson in sword smelting, dazzled, even if the hour seemed a bit directionless.”
Serena Davies, The Telegraph

“So much airtime is devoted to sexual violence and commodifying women’s bodies. Protesting may seem as profitless as worrying over why 99% of hobbits are sexless dudes who have never heard a Marvin Gaye record. But that hardly justifies adapters David Benioff and DB Weiss unremittingly pimping up the novels’ rudery.”
Stuart Jeffries, The Guardian

“Though the dialogue and scenarios were sometimes clichéd, Undeniable was undeniably gripping. The acting was excellent: Peter Firth was by turns sympathetic and sinister as the accused doctor.”
Sameer Rahim, The Telegraph

“Here is a plotline that has been done so many times before, and much better. It wasn’t that it was bad, it was just that it felt too familiar, too unambitious and too full of hackneyed clichés.”
Andrew Billen, The Times

“The story was uncluttered. There were no sub-plots, no digressions, just a narrative that kept switching back and forth as we wondered: ‘Is she or isn’t she?’”
Christopher Stevens, Daily Mail

“Though mildly informative at times, the show was woefully naive about the physical and ethical dangers involved in the processes it described. The presenters Ellie Harrison and Dallas Campbell were so obsessed with bling that they never paused to think.”
Sameer Rahim, The Telegraph

“Presenter Dallas Campbell went diving for pearls in Australia’s South Seas and we endured one of the dullest sequences imaginable, as he stood to show us how long he could hold his breath (one minute, eight seconds), before he went swimming.”
Christopher Stevens, Daily Mail