“Something has shifted slightly, like an ambitious tower of sponge starting to crack under its own weight.” Read on for the verdict on last night’s TV. 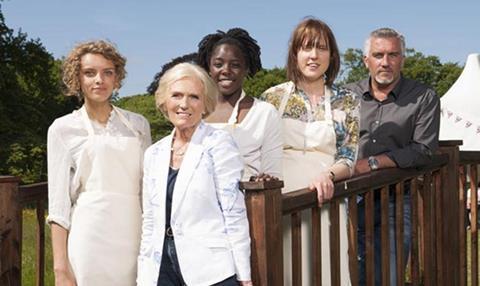 “Where other reality shows are finding increasingly devious ways to crush dreams, the Bake Off remains cosy, nurturing and polite. But this series, something has shifted slightly, like an ambitious tower of sponge starting to crack under its own weight… Keeping Ruby in until the final week is the Bake Off’s concession to its reality TV backbone. Until now, it had always kept that hidden under a swirl of delicate piping.”
Rebecca Nicholson, The Guardian

“Last night’s semi-final was a reminder that The Great British Bake Off may be the friendliest show on television, but it’s still got a competitive crunch… With only younger female contestants left in the competition, the feeling of being a fly on the wall during a home economics A-level practical is now unshakable.”
Ellen E Jones, The Independent

“As long as there were men competing in the baking tent, Paul Hollywood was the alpha male. Now the weaker contestants have gone and it’s all women, the 46-year-old Liverpudlian looks less like their boss, more like their teddybear. He stands beside Mary with his legs straddled wide and his fingers hooked into his jeans like a cowboy. He’s just the deputy sheriff, though; Mary is the town marshal.”
Christopher Stevens, Daily Mail

“One single word, spoken in the heat of the semi-final of The Great British Bake Off made me realise why I’d come to love Beca so. That word was ‘banoffee’… Beca, God bless her, is a Welsh lass and a soldier’s wife. She doesn’t have a pretentious bone in her body, and she gets three cheers from me for that.”
Neil Midgley, The Telegraph

“Don’t Tell the Bride is best when it all goes wrong but the couple end up happy anyway, and this was the show at its best… It is unashamedly manipulative, but it’s just warm enough to get away with it.”
Rebecca Nicholson, The Guardian

“Based on a novel by Harry Bingham, this adaptation clearly struggled to sort the story’s myriad details into a properly paced 60 minutes, but once you gave up on following the murder plot, there was plenty else to enjoy: the hint of an attraction between detective’s Griffiths and Brydon, the varying stabs at a Welsh accent and the exquisitely chic coat lapels of suspect Mrs Rattigan.”
Ellen E Jones, The Independent

“Michael Sheen was already regarded as one of Britain’s finest actors. His performance here is off the scale — embarrassment, control freakery, naivety, repressed desire, self-loathing, self-worship and a writhing  bagful of even more complex emotions are contained in every gesture.… If you’re planning to watch on catch-up, keep a fire extinguisher handy, because some of the scenes are hot enough to melt the pixels in your telly.”
Christopher Stevens, Daily Mail

“The characters are from Northern Ireland and, like groups of young people from all over the world, they’re sharing a flat in London. I was disappointed, though, to find just another wacky, twentysomething flatshare caper barely in touch with its roots.”
Matt Baylis, Daily Express