“Mary Berry treated him with real affection, like an auntie with a favourite naughty nephew.” Read on for the verdict on last night’s TV. 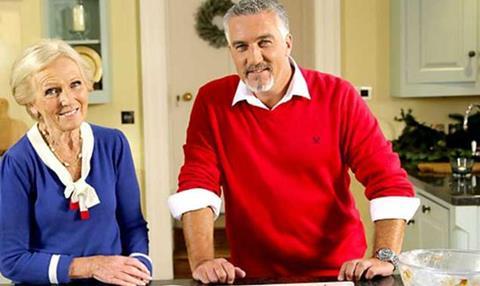 “There were no pesky contestants getting in the way on the Bake Off’s Yuletide special: just Mary Berry and Paul Hollywood preparing their favourite festive artery-cloggers, from mincemeat streusel to watercrust pie. The spotlight thus turned to the chemistry between our two partners in cream. And chemistry it was because what they were doing — and I apologise in advance if some of the Bake Off faithful deem this sacrilegious — can only be described as flirting.”
Ed Potton, The Times

“Throughout this cheerful yuletide cookery lesson, Mary Berry treated him with real affection, like an auntie with a favourite naughty nephew.”
Christopher Stevens, Daily Mail

“All in all, in the vast slew of Christmas culinary shows clamouring for our attention, this one was most likely to get us in the kitchen just for the sheer pleasure of it.”
Gerard O’Donovan, The Telegraph

“This doc-comedy about the third-largest call centre in Swansea is a hoot, largely because boss Nev Wilshire and his twentysomething staff all act up shamelessly for the cameras. The atmosphere was equal parts workplace and Club 18-30 resort, with one employee describing the ethos of their Christmas party thus: “You want everyone leaving there smashed, that’s the main thing.” As a succinct appraisal of the British Christmas experience, it was hard to beat.”
Ed Potton, The Times

“Despite the occasional misstep, The Lockerbie Bombing told its story well, letting it unfold chronologically at a suitably measured pace. First the take-off, then a white light in the sky, a disappearance from air traffic control screens and suddenly Lockerbie was burning.”
Lucy Mangan, The Guardian

“Allison Janney and Beau Bridges as the unhappily married Barton and Margaret Scully have been particularly compelling, and in fact they were the only thing missing from an otherwise flawless penultimate episode.”
Ellen E Jones, The Independent