“Portillo has been required to service an itinerary of almost pure cliché.” Read on for the verdict on last night’s TV. 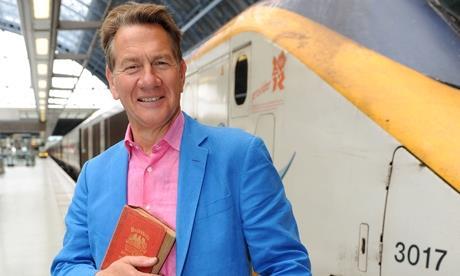 “Portillo has been required to service an itinerary of almost pure cliché. In other programmes, he’s shown a capacity to detour from the ruts of received opinion. Here he’s on rails, and I’m not sure he’s got a great deal of choice.”
Tom Sutcliffe, The Independent

“For all its easy charms, this series gives you plenty to chew on… The easiest, prettiest, lightest kind of telly can leave you with things to think about and the most unlikely personality can make a marvellous presenter.”
Matt Baylis, Daily Express

“Richard E Grant’s Hotel Secrets is pretty close to a television equivalent of one of those Hip Hotel coffee-table books – an opportunity for a bit of vicarious glamour. But Grant’s presence, mischievous and vulgar in just the right way, makes it work.”
Tom Sutcliffe, The Independent

“Kirstie Allsopp says she’s helping people turn their houses into homes, with a bit of vintage inspiration, their own bare hands, and that little bit of homemade magic… Cut to the end of the show, and their living room has indeed been transformed – into a beautiful oasis of 1960s chic… Most of it seems to have been decided on, and chosen, and done, by Amber and Colin though. Maybe she gave them some advice, but as far as I can tell, Kirstie’s input has been more about some of the smaller details rather than the stuff that’s actually made a big difference to their flat.”
Sam Wollaston, The Guardian

“I stayed up for hours on Wednesday morning watching the American election, but I think I learnt more abut politics in the 60 minutes I spent with The Year The Town Hall Shrank.”
Andrew Billen, The Times

“You’re not allowed to hate the contestants on Young Apprentice. It wouldn’t be fair… I still felt, however, for Sean Spooner, the project manager, bamboozled by bossy Maria into ignoring a focus group’s advice not to aim a cookery book just at women. If you are 16 and look as if a razor has never troubled your chops, dealing with a 17-year-old with a mouth on her is far harder than winning, as Sean did, the title of young publisher of the year.”
Andrew Billen, The Times